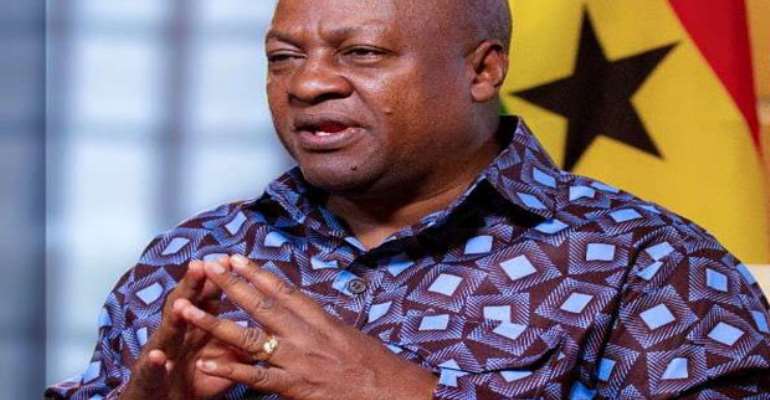 If Dr. Mahamudu Bawumia is reading this piece, we wish to inform him that President John Mahama has told Ghanaians that the economy is about to take-off.

He said the take-off date is 2017 and the announcement was made during his speech to Muslims at the Black Star Square yesterday.

We are unable to tell whether the President listened to Dr. Bawumia's lecture at the National Theatre last week. If he did he might have forgotten the reference by the gentleman to the President's repetitious announcements about take-offs which never leave the runway after boring and screeching taxing.

Unfortunately our President does not find it necessary to express remorse for toying with our intelligence. It would appear that he is overstretching his conviction that “Ghanaians have short memory” and would therefore not remember the promises he made to them.

The Ghanaian has mutated with time and no longer exhibits the previous characteristics of amnesia which the President thinks he can exploit to his political leverage.

Today the economic hardship as a factor has changed him and he is able to tell when the President is not being honest with him.

A foundation, he told us earlier, has been constructed for a forward movement of the economy. Now we are told government is preparing the grounds for the economic take-off next year.

The campaign speeches are so muddled up that we are unable to follow the President any longer. Ghana is set to become the hub of economic activities in West Africa. We have heard this over and over again that it no longer sounds pleasant to our ears.

Those who prepared the President's speech for the Eid El Adha yesterday did not serve their boss well because the presentation only provoked laughter and sneers from Ghanaians.

The speech should not have contained anything about an economic take-off which sounds more offensive than appealing.

The quality of a performance is determined early in the morning not in its twilight.

We have witnessed so many shortcomings and omissions, all of them bordering on incompetency that when the President dangles an umpteenth economic take-off we can only yawn and ask “what the hell is happening in this country under these guys?”

One of the remedies for economic downturns is infrastructural development. This creates employment and triggers economic growth.

We are not witnessing such growth under the circumstances and so we are constrained to wonder why Ghana, under the present crop of politicians, is defying economic standards by not responding to the infrastructural development treatment for our fiscal malaise.

President Mahama makes political statements to cushion himself and he is living up to the standards of his kind.

Not so however his deputy, who as an economist with Bank of Ghana (BoG) experience, should know better and avoid passing snide remarks in his mad bid to be relevant.

We are unable to place the Vice President when he says that “our opponents do not understand basic economics.”

What a Vice President! He promised to fire double shots in response to single bursts from their opponents. Is that the best response he can put up to the Bawumia lecture? More like the serial callers response dubbed, 'Setting The Records Straight.'