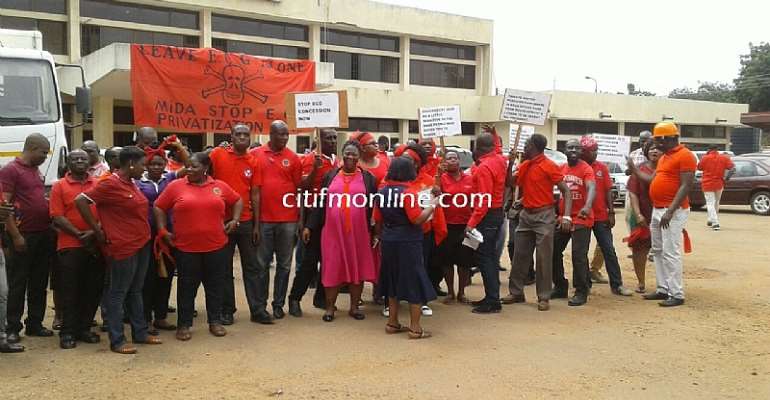 The Public Utility Workers Union (PUWU) says the Millennium Development Authority (MiDA) has acted in bad faith in announcing that the Ghana Power Compact has entered into force despite objections raised to some aspects of it.

According to the General Secretary of PUWU,  Micheal Adumatah Nyantakyi, the Electricity Company of Ghana (ECG) can be made profitable without necessarily handing over the company to a private partnership arrangement under the compact two.

Speaking to Citi Business News Mr. Nyantakyi explained that handing over of a state asset like ECG into foreign hands must not be lauded as an achievement.

“Let me mention that the way MiDA went about announcing this for us we think that they have demonstrated a lot of bad faith and it is also so surprising that measures that are being carried out basically to handover a vital national asset of this nature to a private foreign investor is being seen as such a big major achievement. It's a little regrettable,” he said.

He told Citi Business News that in the union's view, the objective of the compact two can be achieved without necessarily giving out ECG on concessionary bases as that is not the only way to make ECG functionally, and financially sound.

Compact II enters into force
The Ghana Power Compact, also referred to as Compact II, entered into force despite a law suit against the Millennium Development Authority (MiDA) over the concession of the ECG.

A press statement released by MiDA and copied to Citi Business News explained that by the action, the treaty which was signed on August 5, 2014 between the Republic of Ghana and the United States of America, represented by the Millennium Challenge Corporation (MCC) has become effective and Ghana now has access to the Program's funds.

The Compact II
Under the Power Compact, six projects will be implemented to address the the root causes of the unavailability and unreliability of power in Ghana

The rest are Power Generation Sector Improvement Project and Energy Efficiency, and Demand Side Management Project,.

The Government of Ghana signed the Ghana Power Compact with the Millennium Challenge Corporation (MCC), an independent United States government agency, on the sidelines of the US Africa Leaders' Summit in Washington on August 5, 2014.

Ghana to get over 498m dollars
Ghana signed the Power Compact with the United States of America acting through the Millennium Challenge Corporation (MCC), an independent United States government agency, on the sidelines of the US Africa Leaders' Summit in Washington DC on August 5, 2014.

About US$350 million of the grant is being invested in ECG to make the country's power distributor operationally and financially more efficient.

The Compact is being implemented by the Government of Ghana through the Millennium Development Authority (MiDA).