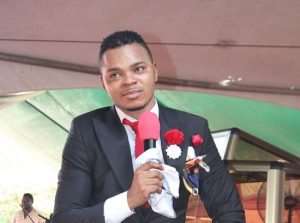 From InusaMusah, Ashaiman Joseph Osei Oppong Brenya, aide and communications director for Daniel Obinim, founder of God's Way International Church, says his boss is not afraid to meet the police.

According to him, though the Domestic Violence and Victims Support Unit (DOVSSU) of the Tema Police had invited Daniel Obinim through a letter, the Bishop was yet to sight the letter.

Daniel Obinim is alleged to have physically assaulted two minors of his church for fornicating. The victims, according to Joseph Osei Oppong Brenya, were Daniel Obinim's adopted children, and the church and parents of the victims had strongly defended the actions the bishop took against their children in public.

Following the alleged assault on the minors, the Tema DOVSSU served Daniel Obinim a letter to appear before it, but the communications director of Daniel Obinim told The Chronicle yesterday that, the said letter was delivered late Friday, after his boss had left Tema for Kumasi, for a church service on Sunday.

The letter was, therefore, received by some staff of the church on behalf of Mr Obinim, Joseph Brenya explained.

“Bishop Obinim would be in Accra on Monday, for a church service on Tuesday in Tema and I can promise you that as soon as he arrives and he is given the letter, he will report at the Tema DOVVSU,” he said.

Daniel Obinim, he continued, respects the laws of the state and “so it is never true that he was dodging the police so that he would be declared wanted by some media houses.”

Joseph Oppong Brenya said the matter would not affect his boss' spiritual encounter and service to God, man and country.

Meanwhile, Assistant Superintendent of Police (ASP) Juliana Obeng, Public Relations Officer of the Tema Police Command, said all efforts to get Obinim had been unsuccessful, and so police commands in Accra and Ashanti Region, where he had branches, had been informed to get Obinim served should he be spotted.