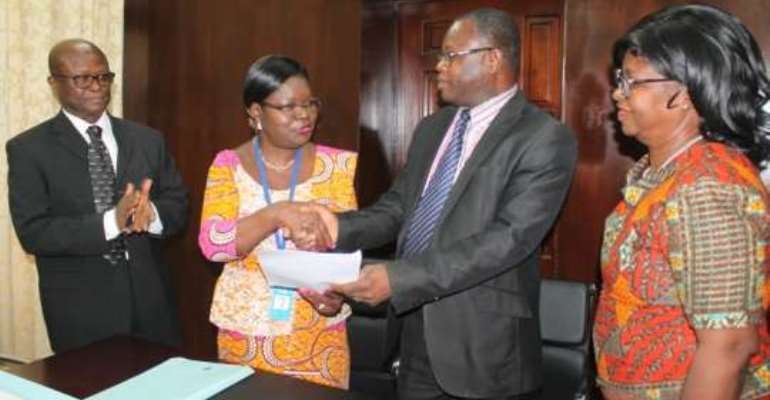 By Iddi Yire/Patience Quaye, GNA
Accra, June 10, GNA - The Accra Polytechnic has signed a Memorandum of Understanding (MOU) with the Ghana Statistical Service (GSS) to give students the opportunity to undertake more practical lessons.

The agreement would provide the framework for co-operation for Mathematics and Statistics development of the Accra Polytechnic and GSS in support of industry and academia.

The agreement was initialed by Dr Philomena Nyarko, the Government Statistician, for the GSS, and Professor Sylvester Achio, the Rector of Accra Polytechnic.

Dr Nyarko said: 'Despite the progress being made in the country's statistical development, we stand the risk of having a diminishing resources pool of highly qualified as well as efficient and effective researchers if we do not make a conscious effort to replenish that resource.

'That is why this event is every important and expected to contribute extensively to the strengthening of the statistical production and dissemination within our nation,' she said.

Dr Nyarko said all over the world, polytechnics were equipping their trainees with the requisite expertise to complement graduates from other tertiary institutions to ensure their competitiveness on the labour market.

She said it was in the light of strengthening the capacity and skills of students and staff of the Accra Polytechnic in research that the MoU had been signed to consolidate the collaboration between GSS and the polytechnic.

Dr Nyarko said the GSS's traditional statistical mandate had been expanded over the years to cover emerging statistical needs relating to government development programmes including the monitoring of poverty reduction strategies and the environment, the Sustainable Development Goals, infrastructure, gender and justice.

She said the GSS had, over the years, received interns and national service personal from various institutions and given them the opportunity to experience the work environment to bridge the gap between theory and practice.

Dr Nyarko said as part of efforts to empower the GSS to strengthen state institutions to meet data requirement for evaluating the Long-term National Development Plan, a New Statistical Bill had been drafted and would soon be sent to Parliament for approval and passage.

She said the Bill, when passed, would lead to improvement in the policy, institutional and regulatory framework for the production of statistics.

Prof Achio said the collaboration was for the mutual benefits of the two institutions, adding that Accra Polytechnic would continue to live up to its core mandate of training students in technical and vocational skills.

He said the MoU was in line with the polytechnic's efforts of preparing itself towards the technical universities take-off in September.

Dr Osei Boeh-Ocansey, the GSS Board Chairman, pledged the Board's support for the agreement.