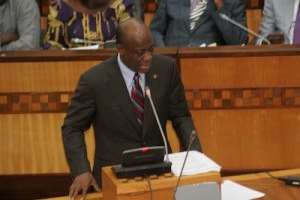 From Inusa Musah, Tema
Workers of the Tema PSC Shipyard and Drydock Corporation have pleaded with President Mahama to implement the recommendation by the Chris Ackumey Committee's report. According to the said report, the proposal by workers of the Shipyard that GPHA should take over the running and management of the shipyard was worth considering.

Raising eight significant reasons that, to them, the Ghana Ports and Harbours Authority (GPHA) have what it takes to upgrade and turnaround the shipyard, the Tema Shipyard workers predicted that the company could collapse in a year's time should  the government fail to allow GPHA to take over the 'dead' company.

Addressing a section of the media in Tema, Christian Dogbe, Acting Chairman of the Senior Staff Association of the Tema PSC Shipyard and Drydock Corporation, said the workers were making a strong case for the GPHA takeover because, “in 2011 when the Government of Ghana (GoG) bought back 60 percent shareholding interest from the Malaysians at a cost of $6.36 million, the GPHA paid that money because of their strong financial muscle.”

Christian Dogbe established the fact the Tema Shipyard, which he described as a sleeping giant in the marine industry, has the GPHA as its landlord, explaining that the handling of income and outgoing vessels at the Tema Shipyard is under the ambit of the GPHA.

“Power distribution at the Dock II and its operational areas are still under the control of the GPHA,” he added.

The workers expressed shock at the sharp U-turn by the General Secretary of the Maritime and Dock workers' Union (MDU), Daniel Owusu-Koranteng, who had recommended that the Shipyard needed a consortium of GPHA, Social Security and National Investment Trust (SSNIT) and Ghana National Petroleum Company (GNPC).

On August 15, 2013, the MDU General Secretary, on a TV3 late news platform, made a strong case for the GPHA to man the Shipyard, and going by his stance, which was stated in Number 179 of the Chris Ackumey Committee's report that said “the proposal by workers of the Shipyard that GPHA should take over the running and management of the shipyard is worth considering,” the workers said they could not understand what might have pricked Daniel Owusu-Koranteng's U-turn.

Questioning what either the GNPC or SSNIT would bring onboard, Charles Dogbe requested the MDU General Secretary and the District Executive to answer why, in 2013, they vehemently rejected Tullow Oil Ghana Limited's project of investing between $25 million to $30 million to partly upgrade the Shipyard, which was a GNPC-GoG sponsored project.

The objective of GNPC at that time was to use the Shipyard as a fabrication enclave for some of the components of the FPSO Atta Mills for the Tweneboah-Enyenra-Ntomme (TEN) Complex Project and other projects beyond the TEN.

The total cost of rehabilitation and staff training for the project was to be recovered from GoG and Tullow Oil Ghana Limited accounts, as part of the total development cost of the TEN Project.

'One may ask whether it is now that the MDU Executives are awakening to know that the GNPC can equally contribute to the development of the Shipyard after refusing the same company's 2013 objective. This clearly shows that the MDU lacks knowledge about the Shipyard they claim they superintendent over.”

Christian Dogbe and the Shipyard workers believed that in order for the Shipyard to achieve the vision of the founder of the Ports of Ghana, Dr. Kwame Nkrumah, as per the original master plan of the Tema Port, the President should task GPHA as the best strategic investor that has the requisite capital and expertise to turn the Shipyard around.

They strongly kicked against releasing the Shipyard to a foreign investor, especially after the Malaysian investors had shown how incapable they were in making the Shipyard work, due to bad leadership and management practice.