Lone voices speak out in Zimbabwe as Mugabe clings on 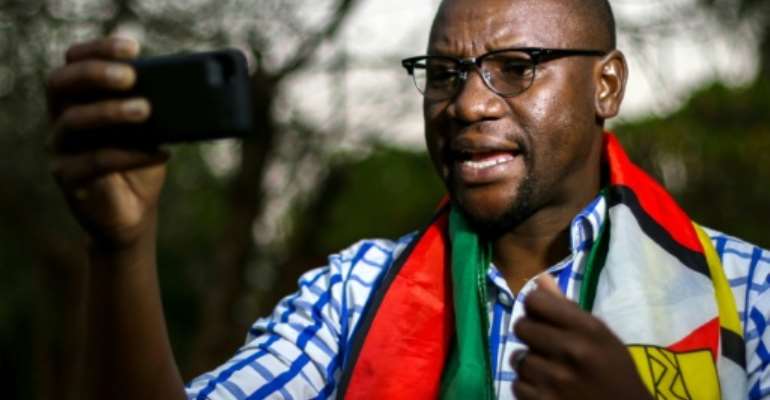 Pastor Evan Mawarire has emerged as a national hero after starting his "ThisFlag" campaign that rapidly became an unlikely outlet for many Zimbabweans' frustration. By Jekesai Njikizana (AFP)

Harare (AFP) - Dissent is seldom aired publicly in Zimbabwe after Robert Mugabe's 35 years of authoritarian rule but, against all the odds, individual voices are taking a stand and tapping into anger bubbling below the surface.

Amid such gloom, pastor Evan Mawarire has emerged as a national hero in recent weeks after starting his "ThisFlag" campaign that rapidly became an unlikely outlet for many Zimbabweans' frustration.

Two days after Mugabe recited a list of his achievements at a rally in April, Mawarire posted a video of himself on Facebook venting against state corruption and the government's failure to provide basic services.

The video, in which Mawarire was wearing a Zimbabwean flag, became a huge hit -- viewed more than 100,000 times -- and spawned a wave of Internet activism in a country where any expression of protest can be dangerous.

"This is how political reform is going to happen," Mawarire told AFP.

"I asked as many Zimbabweans as possible to carry our national flag as a way of saying to our government 'enough is enough'.

"Citizens are aware, they are watching the government when it comes to issues where we feel there is mismanagement of resources or an injustice."

The campaign has unnerved the government due to its non-political stance and its choice of the national flag as its symbol -- making it a difficult target for official criticism.

Two cabinet ministers have instead sought to focus on Mawarire himself, alleging that he is linked to western powers supposedly plotting to oust Mugabe, who has ruled since 1980.

Mawarire, 39, a father of two who describes himself as "just a regular guy who likes to express himself", says he now fears he will attract unwelcome attention from the authorities.

"I am afraid of being beaten, hurt or abducted," he said.

Sylvanos Mudzvova, an actor, knows all too well that Zimbabwe can be a violent and dangerous place for subversive voices.

He was mugged by unidentified assailants in 2013 after he wrote and staged a play about the Arab Spring.

The play told of disillusioned Zimbabweans including a street vendor and a motor mechanic who planned their own version of the protests in Harare's main public square.

The mugging left Mudzvova with a paralysed left leg, and he still walks with a limp.

Mudzvova is also a close friend of Itai Dzamara, an outspoken anti-Mugabe protester and rights activist who is missing -- and feared dead -- after being abducted in mysterious circumstances more than a year ago.

"There are issues that the government needs to address but hasn't and we shouldn't keep our mouths shut in a conspiracy of silence," Mudzvova told AFP at Alliance Francaise in Harare while preparing to stage his solo act on the opaque diamond-mining industry.

To avoid arrest, Mudzvova often performs what he calls "hit-and-run" shows in a public places, such as shopping centres and marketplaces, without any warning.

He quickly performs his short play and leaves the surprised audience pondering the issues he has raised.

Another cleric, Patrick Mugadza, has vowed he will continue to speak out even after being detained for a lone protest carrying a placard that read "Mr President, the people are suffering" outside the ZANU-PF annual conference last year.

He was released on $50 bail after spending 16 days behind bars.

Undeterred, Mugadza last month gave a sermon while chained to a lamp-post in Harare telling listeners "until we stand up and demand our freedom, we will watch our nation bleeding to death."

Such individual protests pose little threat to Mugabe, who retains a fierce grip on power despite increasing signs of ageing and has vowed to run for re-election in 2018.

But they offer glimmers of hope to the many Zimbabweans who wait for the country to begin a new chapter when Mugabe's long rule finally ends.

"This can get serious on the back of the deteriorating economy," Ibbo Mandaza, head of the think-tank Southern African Political and Economic Series, told AFP. "Anything can happen."