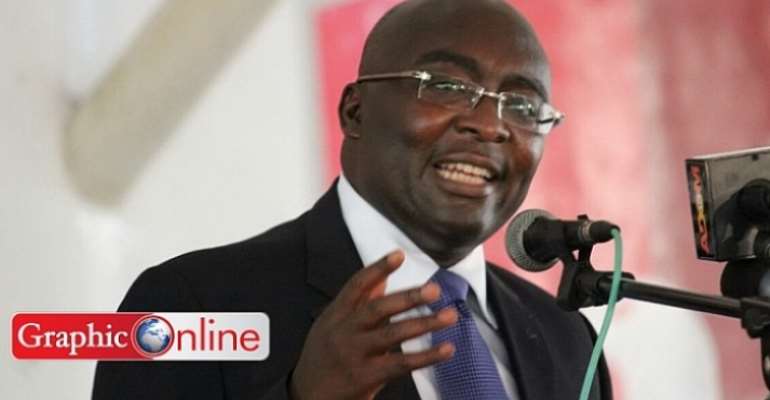 The Communications Director of the New Patriotic Party (NPP), Nana Akomea, has rationalised comments made by the party's vice-presidential candidate, Dr Mahamudu Bawumia, which have been condemned, as inflammatory.

Nana Akomea, on Joy FM's Super Morning Show  yesterday, said the vice presidential candidate of the party was making a case for balance and inclusion in the national political leadership of the country.

Addressing party supporters in the Sissala East constituency in the Upper West Region over the weekend, Dr Bawumia said the seat of the current National Democratic Congress (NDC) government did not adequately mirror the two dominant religious groups in Ghana.

Presidency accused
He accused the presidency of being biased towards Muslims in the country and urged them to vote for the NPP in the upcoming elections to bring religious balance to the presidency.

'...In this country, we are living peacefully and nicely as Muslims and Christians. So we believe in the NPP that Christians and Muslims should work together and that is why whenever we pick a president as a Christian, we pick a Muslim as a vice."

"So that when we combine the Quran and the Bible, Ghana will be the major beneficiary. The blessings of God will be upon Ghana if we have the two religions in the Flagstaff House," he ended.

His comments have since aroused condemnation from the general public.

But Nana Akomea has insisted the intention of the comments of the vice presidential candidate is to promote religious balance at the presidency.

"Bawumia didn't say don't vote for somebody because he is not a Muslim. He is saying that if we have a balanced ticket in terms of religion, he thinks it will be better for the country.

"He may have said something that may arouse legal sentiments and if that is the case then we are all learning as we move forward but all of us talk about having ethnic balance in our political appointments, don't we?"  Mr Akomea quizzed.

NDC reacts
But the National Organiser of the National Democratic Congress, Kofi Adams, said Dr Bawumia's remarks were "silly" and must be condemned.

He said the former Deputy Governor of the Bank of Ghana was short of messages for Ghanaians and was, therefore, resorting to religious politics.

"All his economic theories, following President Mahama's 'Accounting to the People's' tour [have] been thrown off so he has no message again when it comes to the economy so he must move to these other areas which will not help him," he indicated.

A Presidential Staffer Dr. Clement Apaak, also called on Dr Bawumia to render an unqualified apology to Ghanaians for suggesting that the Flagstaff House is religiously skewed in favour of Christians.

According to Dr Apaak, the comments by Dr Bawumia were unfortunate, false and must be condemned by Ghanaians.

Speaking to Starr News, Dr Apaak said President Mahama's government cut across the board and did not favour a particular religious group.

'He is making [the comments] out of mischief; if you look at President Mahama's appointees, they are across the board and it is not the case that we should be encouraging this kind of selfish religion-based intentions of persons who are seeking political power largely because of their  personal interest.­