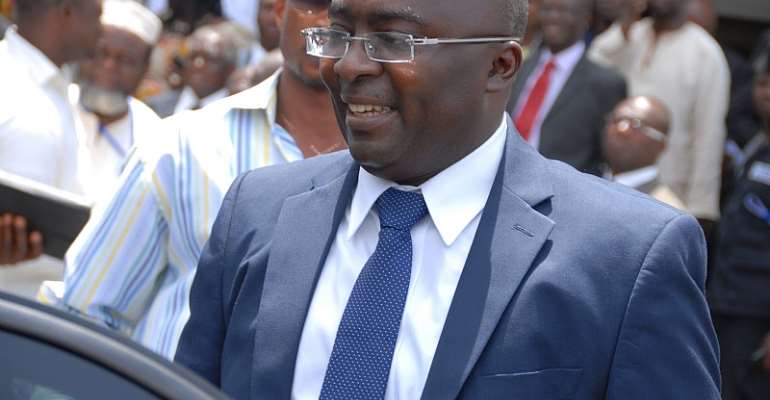 I want to keep it short. No long talk. Straight to the point. When I read what you said on your campaign tour in the Sissala East District of the Upper West Region about religious imbalance in the Flagstaff House, I didn't believe you actually said that.

I restrained myself from commenting on your words until I heard the audio. Like Yaw Osafo Marfo's leaked ethnocentric tape, I still waited for you to either deny the voice or claim that it was doctored. But that has not happened. Your party people are mounting a staunch defense. These are the words I heard you speak at the event:

“Another major issue that I want to bring to the attention of the people is that; if we look at the Flagstaff house today, it does not reflect the people of Ghana in terms of religion.

“We are in this country living peacefully and nicely; Muslims and Christians. So we believe in the NPP that Christians and Muslims should work together and that is why whenever we pick a flag bearer as a Christian, we pick a Muslim as a vice. And when we come and pick a Muslim as a flag bearer, we will pick a Christian as a vice. So if, Insha Allah, Nana Akufo-Addo becomes president, he will swear with the Bible and enter the Flagstaff and I will swear with the Quran and enter the flagstaff House. So when we combine the Quran and the Bible, Ghana will be the major beneficiary. The blessings of God will be on Ghana if we have the two religions in the Flagstaff House,” you added.

Dr. Bawumia, I don't know how you still feel after the controversy that has raged since you said these words. But I want you to ignore whoever is justifying what you said and is defending you. The only honourable thing to do in this situation is to accept that you erred and apologise.

Ghanaians know who you are. The spectators on the sidelines of our turbulent political pitch know what Bawumia is made of. When the name Dr. Mahamudu Bawumia is mentioned in Ghanaian politics many, including your avowed critics, associate that name with civility, intelligence and a high level of decency. When Dr. Bawumia is mentioned, our minds go to the economy. In fact, for some years now, you have made it very difficult for the governing National Democratic Congress (NDC) to lie about our economy and get away with it. When you cough, they catch cold. In one of my articles, I likened you to a prophet and outlined some of the prophesies you made. The government denied your prophesies and called you names, but all that you had said later turned out to be true.

For this reason, descending to petty but dangerous religious politics is a complete deviation from the Bawumia we know. In the mildest of descriptions, what you said was irresponsible. It was in bad taste. It was divisive. It was politically immature. In fact, you have committed a political suicide. You have sunk to the level of Dzifa Attivor who said the New Patriotic Party (NPP) had targeted and jailed Ewes so if the party was voted into office, they would again jail Ewes. You are in your lowest ebb since you entered the political arena.

If you ever accept the defense your party is putting on your behalf, I will not regard you more highly than Dzifa Attivor or Fiifi Kwetey, who is alleged to have said in the past that a Muslim could not become President. You can rise above the trenches of dirty politics and be a ray of hope for those who yearn for intellectual and mature politicking. It is your choice.

When Dzifa Attivor made those comments, she was condemned because the tribal politics she was promoting is dangerous. Beyond the condemnation, however, her statement was subjected to strict analysis. So beyond the dangerous religious undertones, I want to point out why you were wrong in this regard.

The voice recording of your speech showed that your audiences were illiterates. You spoke English and someone else had to translate what you said. It is safe to assume that some of your audiences are jobless young men whose idle hands are very useful to the devil. In an era when Islamic extremism is a threat to the West African sub-region and Boko Haram has threatened the relative stability of the continent, this is not the time to point out the marginalization of Muslims in terms of representation at the presidency. Your audience are not intellectuals who can sieve through your message and ignore it. You may just have watered and fertilized some extremist seeds that have been planted in the minds of some people. Remember a group like Boko Haram was emboldened and empowered by politicians.

Dr Bawumia, when you talk about having a Christian and a Muslim in the Flagstaff House, the next thing that should come to the minds of your Muslim audience is the benefit that would bring to them. I am not a Muslim and I don't really know what having a Muslim as Vice President brings apart from the name. But I have observed that when we had a Muslim vice President in the person of the late Alhaji Aliu Mahama, Muslims in Ghana used to have an annual period of national and international disgrace with regards to the organization of the Hajj, the yearly pilgrimage to Mecca. As a journalist, I have covered the suffering and frustration of pilgrims as they waited their turn to fly to the holy land of Mecca. The sun, rainfall and other harsh weather conditions visited them often and the mess was an annual ritual. In fact, media houses had templates when chronicling their woes every year. It was shameful.

When Professor John Atta Mills of blessed memory and his Vice, John Dramani Mahama, took over the affairs of the state, they moved to restore sanity in the organization of the Hajj. In 2009, then Vice President John Dramani Mahama, I'm told, was very instrumental in getting private sector to help in building the air-conditioned Hajj village near the El-Wak Sports Stadium at a very subsidized cost. Prospective pilgrims awaiting their flights had water, mattresses, decent accommodation and could watch what was happening in Mecca on a giant DSTV screens as they waited for their flights. I am told that government subsidizes some costs associated with the pilgrimage, especially when the dollar-cedi ratio becomes unfavorable when pilgrims have already made their payments.

I have also seen a plane belonging to the Ghana Air Force airlifting pilgrims, whose time was due to travel to Mecca, from the Tamale Airport to Accra. They didn't have to come and wait and suffer in Accra prior to their departure. I am against the use of national resources to facilitate people's religious trips, whether they are Christians or Muslims.

I only mentioned it to point to you that Muslims are not treated badly under the Christian President and Christian Vice President. For this reason, you do not have a strong point to want people to vote for your party. If there is someone who should campaign to Muslims, then President Mahama has a stronger point in asking for Muslims' votes than your party.

Dr Bawumia, you have said something dangerous and detrimental to your political future. Under normal circumstances, you should be the one to lead the NPP when Nana Addo Dankwa AKufo-Addo leaves the political scene. When you have that opportunity, you will need votes from all Ghanaians to be able to win. About 70% of Ghanaians is Christian. Muslims are about 16% of the population. The Muslim community in Ghana, especially the Zongo communities, are mainly sympathizers of the NDC. If you make yourself and your party unpopular on religious grounds, you will be hurting yourself and your party. You will be committing a political suicide if you ever become a flag bearer and people identify with you in this regard.

So, Dr. Bawumia, ignore those who are defending you and are justifying your worst political statement ever. In Ghanaian politics, your followers will hail and defend you irrespective of how low you sink. They will hail you to your grave and when you are buried, the same people would turn around and say, “We said it. We knew he was going to ruin himself.”

Being remorseful for what you did wrong and apologizing is not a sign of weakness. It will only distinguish you from the likes of Dzifa Attivor who will stick to their shameful tribal comments because of such endorsements by their party people.

The 2016 election is an open race. The NDC can win. And the NPP can win. But if the NPP will win this election, you should not descend to the gutter. You should not engage in petty politics. Tribal or religious politics will not help you. Some people know how to do this better and will surely beat you with experience when you go that way.

It appears it has become a strategy that your party stress ALHAJI when they want to mention your name. It will not help you. There's hardship in the country. In my opinion, the governance of our nation has never sunk this low since 1992. Apart from the diehard supporters of the NPP and NDC, there are others who will vote for the party that has something to offer on how to create jobs, reduce corruptions, provide stable and reliable power and take our economy back from the IMF.

If pettiness, tribal and religious politics did not win the NPP power in 2000, then it won't help you in 2016. We have more enlightened voters now than in 2000. They are in the minority. But they are bug enough to cause change. And remember, others are more experienced than you when it comes to pettiness.

(A young man who wants Ghana to Work again)

The writer, Manasseh Azure Awuni, is a senior broadcast journalist with Joy 99.7FM. His email address is [email protected] .