The Weakness Of Dr. Bawumia’s Strength 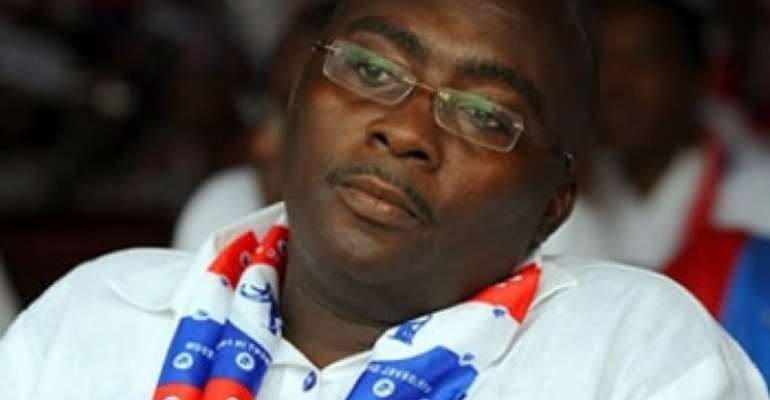 Dr. Bawumia was selected to become a vice presidential candidate for the NPP to complement Nana Addo in the areas he so much lacks; that is economy and finance, including health, education and others. Basically Dr. Bawumia is supposed to speak on issues while Nana Addo continues to spew vile, lies, and violence.

Dr. Bawumia has been successful in some ways because, he is an Oxford educated, a PhD scholar, and held the honorable office of Deputy Governor of Bank of Ghana. Dr. Bawumia, with the help of some media houses and heads of certain institutions, got various chances to speak very strongly on the economy and other issues. The economy of Ghana and indeed the whole world have had some economic challenges for some time now. These challenges provided a safe haven for opinions of Dr. Bawumia to sound as a prophet.

Recently with the hard work of the President of Ghana, John Dramani Mahama, ministers, deputies, government appointees, civil servants, public servants, private organizations, etc, macro-economic indicators are taking shape in favor of the government of Ghana, amidst visible infrastructural layout necessary for the development of a country.

The solid building of the various infrastructure in almost all sectors of our economy; ie health, education, security, roads, water etc, has caused Dr. Bawumia to lose his the argument on issues. His option now is to abandon the reason for his “call to duty” and join his flag-bearer in spewing vile, lies, and religions violence. It is therefore not a surprise at all to hear the things Dr. Bawumia decided to talk about recently.

Even logically the talk of religion in Ghana politics by Bawumia makes no sense, I am not sure if he is asking Muslims to vote for the NPP because they, the NPP represent Muslims; and therefore asking all Christians to vote for the NDC because, Christianity has an obvious representation in the flagstaff house.

Ghana politics has not been an issue of Christians versus Muslims even though the NPP has tried to play it against the NDC. All you need to be a President, among others, is to be a Ghanaian. Dr Bawumia is left with nothing but to move far to religious pandering, while the President is on the road visibly (filli-filli) showing to Ghanaians what his stewardship has brought to the people, much to challenge Dr Bawumia’s twists and doubts on the President’s performance over the last couple of years. If his flagbearer and surrogates have long taken to militancy and ethnic paths, while his chosen path of expertise has been badly exposed and not finding traction, the only option left for him is to abandon it and shift onto the religious path. This is unfortunate of a Ghanaian scholar and intellectual whose expertise is expected to be laid truthfully to benefit his people, rather than the persistent willing deception of vulnerable Ghanaians for political expediency.

Dr Bawumia and his NPP propagandists should turn away from where they are headed, and choose constructive criticisms to save any remaining respect and dignity left with them. He should do the honorable thing of leading his dangerous NPP elements from the reckless path towards creating a state of fear among peaceful Ghanaians, with their “all die be die” activities and utterances. Society expects them today to allay their fears by helping us to understand the daily revelations about their choice for militancy with the “Serbian 4 and South African 3” and what has been documented recently by their own Party Chairman in the African Watch Magazine, among other media interviews, as the country heads into national elections.

Do not allow your craze and crave for a single political office weaken your strength, Dr Bawumia, and cause you to lead our peaceful country on a disturbing path that others have painfully travelled.