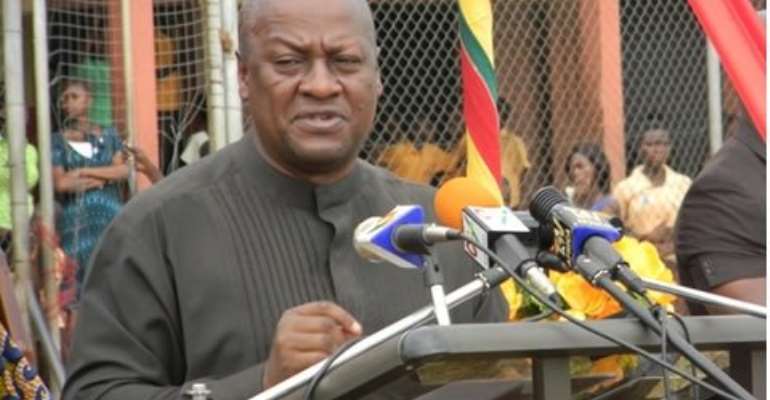 Accra, March 26, GNA - President John Dramani Mahama, on Saturday, gave the assurance that he would not take the Volta Region for granted but would rather continue to ensure that they gain their share of the National Cake.

He said the Volta Region had over the years voted massively for the National Democratic Congress in all national elections and it was only fair to recognise their contributions by providing them with their share of development projects.

"The Volta Region is not only my world bank ...but it is also my IMF and I will do everything possible to give you your share of development," he stated.

President Mahama said this when he addressed the Chiefs and people of Sokpoe in the South Tongu District of the Volta Region during their annual Tortsogbeza Festival.

The 32nd Edition of the festival is on the theme:"Consolidating the Socio-cultural Uniqueness of Sokpoe for Development: The Past, Present and the Way Forward."

The festival, which annually brings the sons and daughters of the area together to deliberate on development projects in the area was attended by politicians, members of the Diplomatic Corps and people from all over the country.

President Mahama urged the youth who had attained 18 years and above to register when the limited registration exercise opened this year.

He, however, warned against multiple registrations, saying that it was a criminal offence, which could, subsequently, disenfranchise them and lead to their prosecution.

On development projects in the area, President Mahama said the Government would continue to create the necessary environment in the areas of Health, Education and Agriculture to enable them to harness their potentials.

He promised to construct a Community-based Health Planning and Services (CHPS) compound in addition to the District health facility in Sogakope, their district capital, and support them in the educational sector.

President Mahama appealed to Chiefs and other opinion leaders in all Ghanaian communities to fully participate in the educational programmes of their wards because achievement in the education sector required the collective efforts of all stakeholders.

He said Ghana had over the years been blessed with peace and unity and called on Ghanaians everywhere to play their roles responsibly to maintain the status quo.

Mr George Asafo, the Chairman of the Planning Committee, appealed to the Government to construct a CHPS compound, which would take care on basic health challenges in the area.

He also appealed for accessible roads in the area to enable them to cart foodstuffs from farming communities to marketing centres.

According to information of the website of dearghana.com, Tortsogbeze recalls the historic crossing of the Volta River following their arrival on the migratory journeys of the people from Notsie with the other Ewe groups.

In their case, they were reputed to have settled for some time at Penyi, near present day Dzodze before making the final push to their present location some three hundred or more years ago.

To the elders of Sokpoe, they were led during the period of their predicaments by an elder known as Tenutse.

In addition to marking the crossing of the river and eventual settlement, the festival also manifests Sokpoe culture, their economic activities and other aspects of their social and cultural life.

Highlights of the festival include mass funerals prearranged on the clan basis for all who died after the previous festival.

In Sokpoe, funerals for traditional believers as opposed to Christians and Muslims, are not held immediately after the burial.

They are reserved for observation and held a week before the start of the festival.

Other important items included in the festival are the purification of royal and ancestral stools, settlement of disputes within and among the clans, historic symbolic crossing of the river, and the pacification of traditional divinities of the area including their gods and royal ancestors. There is also drumming and dancing midst merry making by the people.

The events is climaxed by a grand durbar usually held on a Saturday while the following Sunday features an inter-denominational harvest and thanksgiving service.

A picnic crowns it all on Monday before non-residents and invited guests depart, biding each other well till they meet again.