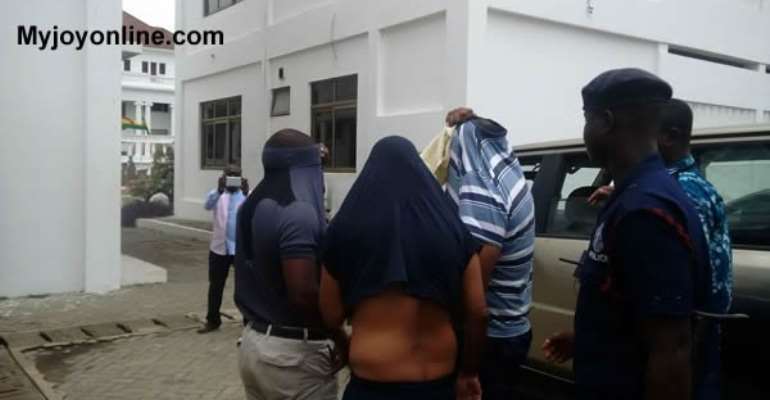 A Circuit Court in Accra has granted bail in the sum of ¢2,000 each to the three south African ex-police officers brought to Ghana to train bodyguards of NPP leaders.

All three pleaded not guilty to charges of conspiracy to commit crime and unlawful training and were consequently granted bail with a surety each.

Presenting details of the case before the court, DSP A.A.Annor said the accused South Africans arrived in Ghana on the 11th March 2016, ostensibly to conduct business but were caught training about 15 people.

The Police prosecutor asked the court to remand the three to enable investigators to conclude their work.

But Ellis Owusu Fordjour, lead counsel for the accused prayed the court to grant them bail since said all the offences the suspects were accused of were misdemeanours.

He also said they had given voluntary statements and that they were not engaged in military training since they didn't use bazookas.

He added the suspects were invited by Captain Koda, head of Akufo-Addo security team to train his personal security and they came in without lethal weapons.

He insisted the facts do not support the charges being brought against his clients. The leader of the three, Chris Hazis trained Nana Addo Dankwa Akufo-Addo's bodyguards in 2012 and was in the country a month ago.

Another prosecutor, Francis Baah rebutted the lawyer's claim that they carried no guns because to him his police training started without the use of guns.

He added that they were teaching the people high-level military training and that they had no fixed place of abode. And that they needed 14 days to do investigations.

Another lawyer for the three South Africans Atta Akyea added that it will not speak well of the state if the suspects are refused bail simply because of lack of a permanent residence because Ghanaians are not deprived their rights because of lack of permanent addresses.

The head of Nana Akufo-Addo’s security team, Captain (rtd) Edmund Koda and the owner of the EL-Capitano Hotel Captain (rtd) Acquah were also arrested and have been charged.

'Give peace a chance', ICoast ex-president tells police
29 minutes ago