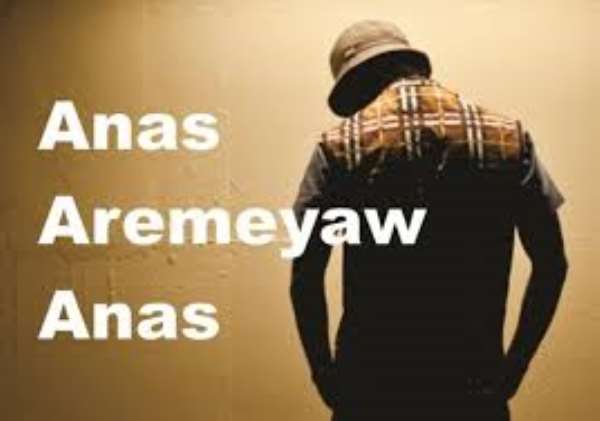 No, I should rather have titled this publication, “Anas’ Efforts have been Made Fruitless” or “Ghanaians by Lack of Interest have Made Anas a Laughing Stock”.

Anas, a Ghanaian ace investigative journalist that I have much respect for, spent two years of his precious time investigating then and always alleged cancerous corruption within the Ghana Judicial Service. In the end, he captured some judges, court clerks and other personnel in the service on video being proposed, and accepting, bribes of all sorts to twist verdict in favour of the person, or the party on whose behalf the bribe was offered.

Those offering the bribes and their agents, were clearly the guilty party or parties if the judges had been honest to follow proper legal or court proceedings, where declaration of verdict or ruling is solely based on availability of credible evidence and facts, but not on any collusive legal technicalities or pure acts of corruption as exposed by Anas.

Even though a few of the judges caught red-handed taking bribes of all sorts – goats, sheep, cats, dogs, yams and, or money, have been sanctioned, or to be more precise, sacked with forfeiture of their end of many years service emoluments, some are still knee-deep in corruption. They cannot come out of a habit they have cultivated over several years in the course of practising their legal profession.

There is a dictum, “One doesn’t have to be a lawyer to know the law”. My knowledge of the law gained through research and reading tells me when a judge is acting unethically unprofessional. In the midst of abundant credible evidence, facts and the obvious related laws and regulations, if a judge for completely absurd, inexplicable or incoherent, reasons, does deliver a ruling that flies in the face of common sense or judicious adjudication, then the judge is being corrupt.

In the case of the ongoing Kumawu chieftaincy dispute where the purported Ashanti Overlord, Otumfuo Osei Tutu II, has vowed to have his way regardless of his behaviour contravening existing conventions, two judges including the Chief Justice herself, are obviously exhibiting, or if not already exhibited, acts of corruption.

The first judge, one Paul K. Richardson of a Kumasi Human Rights Court made himself a complete joke. By his ruling to a case brought before him on the directions of Otumfuo Osei Tutu II issued to the Kumawu kingmakers to enstool one Dr Yaw Sarfo as Kumawuhene-elect, although such directives being in contrast to Kumawu traditions and customs as well as constituting abuse of power by Asantehene, Judge Richardson sided with Asantehene. He disregarded the evidence, facts and the laws to order Kumawuhemaa to proceed with her plans to enthrone Dr Yaw Sarfo as Kumawuhene. Following that, I published an open letter to him on ghanaweb.com, modernghana.com and spyghana.com. The indicated web link takes you to that publication.

Asantehene who claims to be above the laws of the land because of his affiliation to the NDC party and his personal friendship with President Mahama, was able to influence the decision of the judge through the Chief Justice, Mrs Theodora Georgina Wood and President Mahama. I am aware of this and can quote some exact words said by one of them to buttress my claim.

Again, there was a contempt of court case brought against the alleged Kumawuhene Barima Sarfo Tweneboa Kodua (Dr Yaw Sarfo in private life). There was an injunction placed on the Kumawu kingmakers, Dr Yaw Sarfo and Kumawuhemaa from installing Dr Yaw Sarfo as Kumawuhene until the determination of the inventory case pending before the Judicial Committee of the Ashanti Regional House of Chiefs. However, Asantehene ordered them to proceed with his enthronement which some of the kingmakers did. They did not respect the High Court order (injunction) hence the case of contempt of court brought against them.

On Wednesday 16th March 2016, a High Court judge who had flown to Kumasi from Accra the previous day, also pronounced a judgment on this contempt case. In the face of all the evidence, he simply said he had thrown out the case. Additionally, he warned all pressmen present not to report the case in the newspapers or on the radio until he has made his written judgment public. This is absolute rubbish! Without a written judgement of all the time that he sat on the case with the numerous adjournments, how could he pronounce that outrageous ruling then?

I shall publish an open letter to him very shortly. Before then, I want the public to note that Asantehene sent an emissary to him in Accra to influence him. The judge chased out the emissary. When he came to Kumasi on Tuesday 15th March 2016, Asantehene Otumfuo Osei Tutu II himself went to see him at the hotel where he had gone to lodge. It was following this nocturnal visit to him by Asantehene, the claimant to be above the laws of the land, that the judge changed entirely his decision and already prepared verdict to come out with a lastminute.com ill-conceived nonsensical verdict hence his warning to the home media.

I am ready to invoke an oath, a curse of course, on both Asantehene and the two mentioned judges if they have not been influenced or tried to influence, one another to come out with such twisted judgments.

Asantehene will never have his way as long as I know the Kumawu tradition and custom and his position as a Ceremonial Asantehene.

Any reader who knows of a powerful deity that can be “tata hwe” should please contact me on [email protected] with the name and directions.

I am with God but some people are eager to deal with these corrupt persons in the language and form that they understand it better.

I shall be publishing the legacy of the Chief Justice Mrs Theodora Georgina Wood very shortly. I shall let the world know how I think of her.

Soldiers will die more in any order to shoot to kill galamse...
25 minutes ago

We see politicians flaunting cars, houses in less than four ...
46 minutes ago