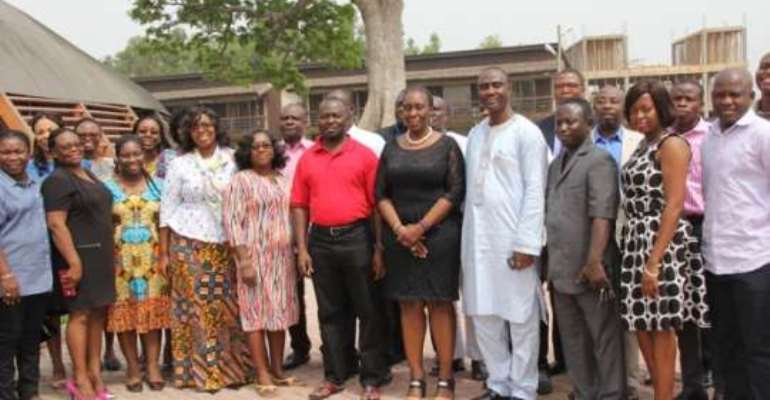 Ada, Feb. 8, GNA - Mrs Marietta Brew-Appiah Oppong, the Attorney General and Minister for Justice, has held a meeting with the Chief State Attorneys and Regional Heads to discuss how to effectively fulfill their roles as government lawyers.

The meeting, which was held in Ada, was also to take stock of their performances for 2015 and also mark the way forward for 2016.

Mrs Appiah-Oppong said: 'I will be interested to know what innovations you have adopted in the course of time to effectively mitigate your problems.

The Attorney General urged the Chief State Attorneys to establish work schedules for the lawyers and strict monitoring systems that would eventually factor into their appraisals and promotions.

Referring to a professional booklet: 'A Guide to Ethical Issues for Government Lawyers', she said government lawyers should accept instructions to advise or represent others honestly, competently, diligently and as promptly as possible.'

She also asked the lawyers to provide professional legal services and avoid compromise to their integrity and professional independence.

Mrs Appiah-Oppong noted that a government lawyer should be able to provide advice that is objectively based in law even if his or her personal interests are directly affected by government policy.

She also asked the lawyers to keep information given to them confidential, during and after employment, unless there was an overriding legal duty to disclose, or a legal immunity to do so.

Commenting on Anas Aremeyaw's exposÃ© involving alleged corruption in the Judiciary, as among the challenges the sector faced in 2015, Mrs Appiah-Oppong told the participants: 'It was with a heavy heart that we watch the videos. It was sad to discover that some of our attorneys and administrative staff are receiving bribes, which detracts or mars the good work being done by many of you'.

She said a committee had been set up to research and evaluate any act of misconduct that involved the justices in the exposÃ©.

Mrs Helen Ziwu, the Acting Solicitor General, said their work as protectors of state resources required them to have integrity, adding that even though the temptations may be strong, they were worth resisting.

She said the lack of adequate infrastructure, including libraries, were challenges for them.

She also said lack of cooperation from the Ministries, Departments and Agencies (MDAs) made their work quite difficult.