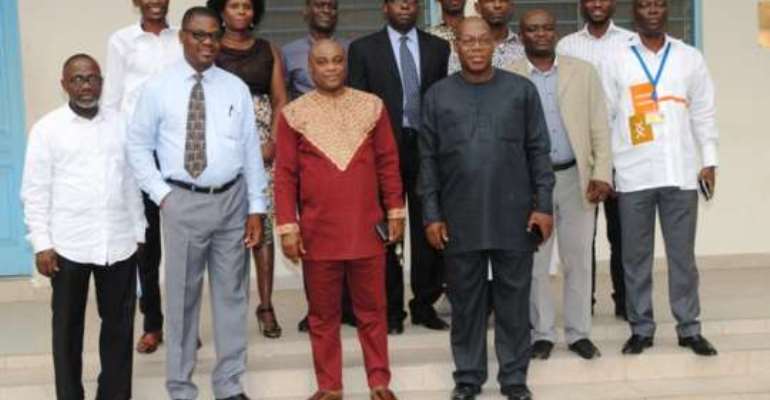 Accra, Jan. 27, GNA - The 1997 year group of the Ghana Institute of Journalism (GIJ), GIJ '97 Supreme Alumni, has donated 1000 notepads and dairies to the institute as part of their homecoming activities.

Donating the items on their behalf, Hon Nii Lantey Vanderpuye, Minister of Youth and Sports designate, expressed his excitement about giving back to the Institute and promised doing more for its development.

The notepads would be put to use by Level 300 and Diploma 1 students in the compulsory internship period during the long vacation.

The Rector of the Institute, Dr Wilberforce Sefakor Dzisah, received the items on behalf of the School and thanked the group for the kind gesture.

He called on other year groups to contribute their quota to the development of GIJ. Dr. Dzisah gave the Institute's assurance of putting the donated items to good use.

As part of the homecoming celebrations, the group is organising a soiree on Friday 29 January 2016 at GIJ to wine, dine and network with former colleagues and student body.

According to the '97 Year Group, they hope to use this initiative to encourage and champion the formal formation of a vibrant national alumni body for GIJ made up of all year groups.

Latest Photo Reports
Catch up with all the political quotes from our politicians.
Advertise here
More Social News
ModernGhana Links
2021 PHC: There'll be sense of how residential units are clustered amongst themselves — GSS
2021 PHC provisional results to be released on Wednesday
C/R: Commuters, drivers stranded as flood divides road at Akomfode
ABANTU for Development calls for the passage of Affirmative Action Bill into Law
Aduana Stars get international partnership
I’m still Upper Axim Traditional Area Nkosuohemaa, disregard reports - Nana Ezra Nkrumah II
We promise to continue to abide by the laws of Ghana — says Eze Chukudi Ihenetu as Igbos celebrate Yam Festival in Accra
Group demand justice for Fulani who died under mysterious circumstance in Nsawam
Stop your tribal shenanigans against Fulanis, we're very sad; be fair in your reportage – Group to media, Police
TOP STORIES