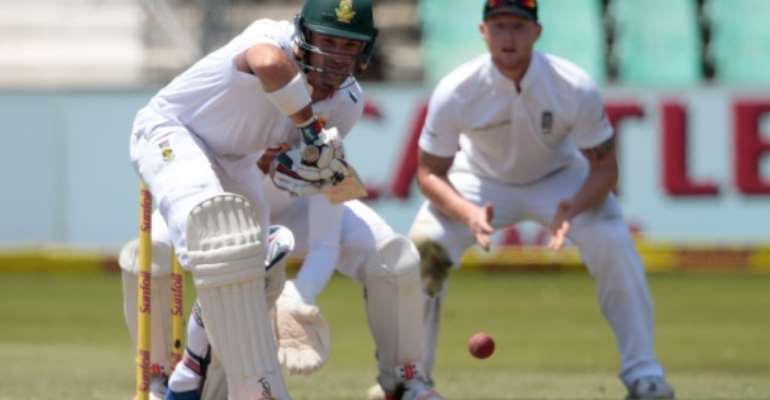 South Africa's batsman Dean Elgar (C) bats during the third day of the first Test against South Africa at Kingsmead stadium on December 28, 2015 in Durban. By Gianluigi Guercia (AFP)

Durban (South Africa) (AFP) - England tightened their grip on the third day of the first Test at Kingsmead on Monday against a South African team weakened by an injury to fast bowler Dale Steyn.

England built on a first innings lead of 89, reaching 172 for three in their second innings at the close of play, an overall lead of 261 runs.

With plenty of time remaining in the match, England were prepared to grind out their runs with risk-free batting in the second innings, scoring at just over two-and-a-half runs an over on a slow, dry pitch which made fluent stroke play difficult.

Joe Root made 60 not out off 109 balls, while first innings top-scorer Nick Compton survived two dropped catches before being caught down the leg side by wicketkeeper AB de Villiers off Morne Morkel for 49.

Both Compton's chances were off Morkel, who also had Root dropped by a leaping De Villiers on six.

Dean Elgar carried his bat for South Africa, making a fighting 118 not out, but he had minimal support from his teammates as the hosts were bowled out for 214. Stuart Broad and Moeen Ali took four wickets each for England.

But he warned that England could not afford to ease up.

"We've seen over the first three days that a lot of wickets can fall in the first session so we still need to play well tomorrow to build on the lead we have now."

South Africa suffered a blow early in the second innings when Steyn left the field with a right shoulder strain after bowling two balls of his fourth over.

He returned to bowl three more balls before crying off again. He went for a scan and was off the field for a lengthy period before returning at the late afternoon drinks break.

South African team manager Mohamed Moosajee said Steyn had experienced discomfort in his shoulder after the first day, which was probably linked to bowling a long spell after a lengthy lay-off because of a groin injury.

He had managed to get through the first innings but felt pain on Monday.

The scan was inconclusive and Moosajee said he hoped Steyn would be able to bowl on Tuesday.

Off-spinner Dane Piedt took the first two wickets in the second innings, trapping England captain Alastair Cook leg before wicket for seven before having Alex Hales caught at long-on for 26.

The left-handed had Elgar batted resolutely for more than six hours while his teammates struggled, reaching his fourth Test century off 211 balls, with eight fours and a six.

He did not add to his boundary count before running out of partners after facing 246 deliveries.

"We didn't get off to a very good start and as the game went on the English took quite a few of our wickets so the pressure was on me to try to bat through," said Elgar.

Elgar was the sixth South African to bat unbeaten through a Test innings.

Fellow left-hander Gary Kirsten was the most recent to perform the feat before Elgar, making 100 not out in a total of 239 against Pakistan in Faisalabad in 1997/98.

Elgar admitted South Africa were on the back foot with their poor series in India affecting their confidence.

"But we've got some serious characters in the team who can get big runs," he said.

Broad followed up his three wickets on the second day with an early breakthrough on Monday, bowling Temba Bavuma off an inside edge with the second ball of the morning, without addition to the overnight total of 137 for four. Broad had figures of four for 25.

Ali, who finished with four for 69, said he had been working on his field placings with bowling coach Ottis Gibson and was striving for consistency.

"The ball spun and bounced quite a bit. I'll be happy if it stays like it is and maybe spins a bit more,” he said.