Hajj Stampede: Where Was Allah? 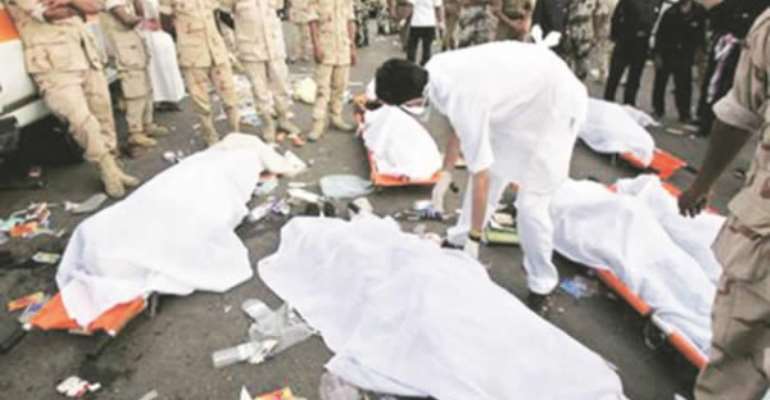 This question has agitated my mind since I read about the tragic incident in Saudi Arabia which claimed over 700 hundred lives including that of a foremost Nigerian journalist, Hajia Bilkisu Yusuf. My heart goes out to all muslims and non muslims alike who lost their loved ones to this unfortunate incident, and hope they draw strength and find consolation in the memories of what might have been the worthy life which they lived and also the good work that they had done.

But to all muslims who are still alive, I believe this is a time for sober reflection, this is a time for us to draw critical lessons from this incident. The Hajj stampede presents us with yet another opportunity to think and rethink the existence of Allah, which is the central pillar of Islam, because such exercise may generate ideas and insights that could awaken all muslims around the world from the kind of dogmatic slumber that led to the tragedy in Mecca.

Personally I have noticed that there is hardly any reference to Allah in the discussions about the stampede in Mecca. Instead people and parties are busy trading blames as if the accident, going by islamic beliefs, was only as a result of some human error or oversight. The Saudi authorities have blamed African muslims for the accident and African muslims leaders and Iran have blamed Saudi Arabia for not putting in place the necessary structures.

But I have not heard anybody blame Allah. Hence I ask: Why? I mean is Allah not part of the deal that took pilgrims to Saudi Arabia? So why do muslims exclude the 'almighty Allah' when apportioning blames and responsibilities since Allah is the raison d'etre of Hajj and Islam? At least, Allah should be blamed for not doing his (her) own part of the job of helping the Saudi authorities or preventing the stampede. For me, Allah literally abdicated his responsibility by abandoning these muslims who lost their lives at a time and place they needed him most - when they were stoning the devil in Mecca. I mean when should one expect Allah to show up in full force if not during the Hajj? Instead Allah just allowed the devil to have an upper hand, and at the end of the duel, hundreds of muslims were crushed to death.

Allah literally failed a trial test - a test of his (her) responsibility to protect the Ummah? Allah could not prevent this tragic incident and he (she) made it seem as if the devil actually triumphed at the end of that contest? But before drawing the conclusion on whether Allah failed or succeeded, we need to ask: Does Allah exist in the first place? I think this is the main issue here.

To all muslims and in fact to all who are concerned about what happened in Saudi Arabia, I think that an incident like this should make us question the existence of Allah or re-examine his purported attributes as an all powerful, all merciful and all knowing God? Such a tragedy should shock us into questioning aloud and into interrogating the claim that Allah is a deity that deserves worship, reverence and sacrifice including the sacrifice of one's life or that of others?

From what happened in Saudi Arabia and in other places in the Africa and the Middle East where muslims have died, have killed or have been killed in mosques and on holy grounds, I think it is high time we began to express openly our doubts and disbelief in the existence of Allah and the assumed qualities? There is no iota of doubt that Allah is an imaginary being that was invented centuries ago by Arabs. Is it not evident that the belief in Allah is a form of superstition like the belief in witches, dwarfs, demons and jinns? Is the belief in an afterlife in paradise not a form of illusion?

I am saying this because when one considers what millions of muslims have done and are doing world wide particularly the bad and ugly things being done by Muslims who strongly believe that Allah exists, that Allah watches over them and wants them to abide by certain rules, fulfil certain obligations like going on a Hajj and would reward them in the hereafter, one cannot but enjoin muslims to rethink the belief in the existence of Allah especially at times like this because such reflections could mitigate the impact of Islamic dogmatism and extremism on muslims and on the world at large. Or I put it this way such rethinking could save lives - both the lives of muslims and non muslims alike.

Let us take for instance the case of Hajj. Hajj is one of the pillars of Islam. Other pillars are Shahadah, Salat, Zakat, Sawm. Muslims embark on a Hajj as a practical demonstration of their faith and they expect that Allah would reward them for fulfilling this religious duty. Due to this expectation, many muslims including those from poor countries like Nigeria risk their lives and use their life savings to go on a Hajj because they expect some reward from Allah but only to meet their untimely death in Mecca. Now as the recent stampede in Mecca has demonstrated, Allah is an impotent imaginary being who could not save or protect pilgrims. So why should poor pilgrims from Africa, who are now blamed for the stampede embarked on this risky journey? The narrative of Allah's existence is being used by Islamic demagogues to oblige poor African muslims to embark on this journey which benefits only the economy of Saudi Arabia not the economies of the countries where the pilgrims come from.

Now if Allah exists and is omnipotent as muslims claim then he could have saved these pilgrims who died. Couldn't he? If Allah were omniscient as muslims claim, then he would have known that the stampede would happen and would have given prior notice to Saudi Arabia or to the pilgrims themselves. But Allah did not. Instead he supposedly chose to remain silent and watched as pilgrims were crushed to death while performing one of the religious duties that he decreed for all muslims.

Or let us take the case of prophet Muhammad who muslims literally deify. Muslims believe that Muhammad was a messenger sent by Allah and that Allah revealed the Quran to him. This belief forms the basis of Muhammad's prophethood. In fact the respect which muslims accord Muhammad, to the extent that some are ready to kill those who cartoon him, is largely due to this foundational role. Now imagine as the stampede has demonstrated that Allah does not exist at all. It means nobody actually sent Mohammad or at least he is not a prophet of Allah. It means that nobody revealed the Quran to him and that Quran is just like any other piece of literature. It means that the Islamic holy book is an adaptation of the Bible, the Torah and other ancient texts and mythologies.

The realization that Allah does not exist would save the lives of future pilgrims because many would not be obliged to go for Hajj since there is no Allah to protect or reward them. Understanding that Allah is an imaginary being would save the lives of people around the world that are in danger due to the activities of muslim fanatics, militants, jihadists and others who think that Allah really exist and are ready to take actions that may harm themselves or others in order to please Allah. Muslims do not need another Hajj stampede to wake up to this liberating fact about Allah and Islam.

The author has 252 publications published on Modern Ghana.

NDC Run To UN To Revoke Akufo-Addo's SDGs Advocate Role Over...
10 hours ago