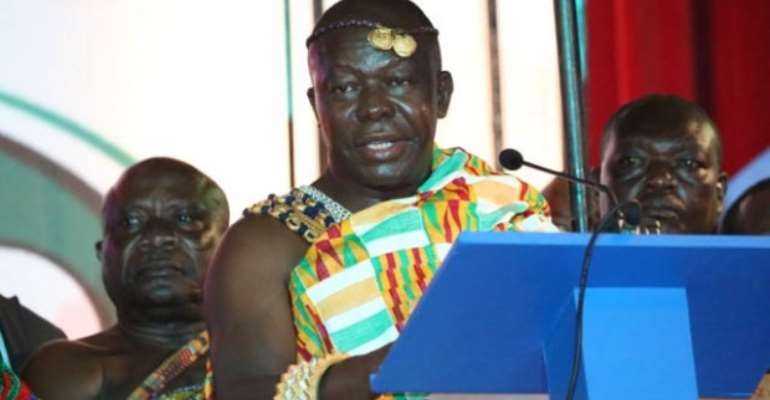 'I know how concerned our friends in the international community are about the sustenance of democracy through elections that are credible; and I have no doubt they will find it of greater value to help fund a more credible process that delivers a fair and just result than to pay for the unpredictable consequences of flawed elections. So we should ask ourselves now: Is our electoral register tainted? If it is, how best can we clean it to give the register credibility? If we are seeking the ultimate fairness, we must seek first the ultimate credibility,' Otumfuo said at the annual Ghana Bar Association (GBA) conference in Kumasi yesterday.

He was not happy about GBA's deafening silence on contentious issues in the country, including the credibility of the electoral register ahead of the 2016 general elections.

The Asantehene said the forthcoming elections could be the most challenging in the nation's constitutional development after the landmark legal tussle which followed the 2012 elections, and that 'The world will expect that all the lessons have been learnt, all the loopholes have been identified and we should therefore have a reasonably error free, truly free and fair polls.'

There has been disagreement on whether a new voter register should be compiled. While the New Patriotic Party (NPP) and the other opposition parties have been vociferous on the need for a replacement of the current register to guarantee credible, free and fair elections, the ruling National Democratic Congress (NDC) has been dismissive of the calls, describing them as absurd and without basis.

The NPP recently claimed the party's 10% investigation had uncovered more than 76,000 people with the same names and pictures on Ghana and Togo's electoral rolls – a development which makes the nation's electoral roll incredible for free and fair elections.

Otumfuo Osei Tutu II said the nation was looking at the GBA, which appeared to have lost focus and fallen into coma, to be able to offer counsel devoid of party interest.

'Politicians have taken their positions, undoubtedly each influenced by perceptions of party interest. In the face of the conflicting arguments, I consider it an obligation on your part to pronounce on this from the perspective of professionals who have a stake in protecting the integrity of our electoral system,' he noted.

Cost Of New Register
Otumfuo pointed out that even though cost continues to be a key factor in considering such matters, credibility of the voter register is pertinent and fundamental for the protection of Ghana's democracy and ultimately the country's peace.

Otumfuo's straight talk attracted rapturous applause from the legal luminaries that had gathered at the Great Hall of the Kwame Nkrumah University of Science and Technology (KNUST).

The conference was held under the theme: 'Rule of Law, Access to Justice and Sustainable Development - The Panacea to Political and Economic Progress of a Nation State.'

The Asantehene said he expected the GBA to kick-start the process to ensure fairness in the next general elections, noting that the association ought to seek first the credibility of the electoral process for fairness to be guaranteed.

Political Favours
According to him, while lawyers and politics are inseparable Siamese twins, there is a line between the political good of the country and slavish attachment to political parties, arguing that this is the nub of the problem afflicting the law today with the overweening and pervasive influence of political parties upon the citizenry.

Otumfuo stated that Ghana had found herself in a period in which political parties had built up into machineries of credible monstrosity seeking to manipulate and control our minds as in an Orwellian society.

He said people at law should never feel the need to grovel at the feet of politicians for the favour of political appointments, as they must be sought by the appointing authority because the nation needs their expertise, skills and intellect.

'Much of the sloppy half-baked legal advice handed down to policy-makers is the product of self-interest couched to please political masters rather than to conform to the requirements of the law,' Otumfuo observed.

He urged members of the GBA to consign such activities to the past, pointing out that 'every epoch in history throws up its challenges and brings forth its heroes.'