Trust me, I won't let you down; Akufo-Addo appeals to People of Volta 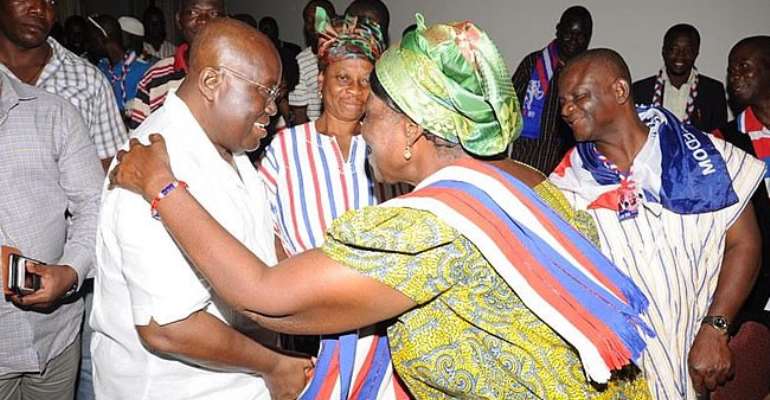 The 2016 presidential candidate of the New Patriotic Party, Nana Addo Dankwa Akufo-Addo, made this known on Saturday, September 5, 2015, when he ended his 3-day tour of the Volta Region at Hohoe, the first region of the month-long nationwide “Rise and Build Tour”.

Addressing party faithful, consisting of constituency executives, parliamentary candidates and party sympathisers from the 7 constituencies in the ‘Mid-Belt’, Nana Akufo-Addo explained that the main reason for this appeal to the people of Volta Region is “because if they help put me in office, they know the resources of the country are going to be dealt with honestly by the next President of Ghana in 2017.”

Equally important, Nana Akufo-Addo explained that he is working with a group of men and women who are capable of giving Ghana a first class government, and whose task will be to build up Ghana again.

“Everything in Ghana today is down. Everywhere you go across the country, and without exception, everybody is having a very difficult life. NHIS is down, our education system is down, and there is no confidence amongst the business community. Our agricultural sector is also declining. This is my concern,” Nana Akufo-Addo added.

“All this is because Cote d’Ivoire chose a far-sighted and practical leader, in President Alassane Ouattara. A boom is now being experienced in Cote d’Ivoire, a country which, until recently, was involved in civil strife and bloody electoral disputes. I am asking the people of the Volta Region to lead the way in saying that ‘Akufo-Addo, we want to give you the chance to turn around the fortunes of the nation, and we are going to trust you to do that’”, he said.

He continued, “I want the people of the Volta Region to know that they are critical to the process of change in 2016. We are determined, this time around, to bridge the gap between the NPP and the Volta Region.”

Ghana bigger than NPP
In admonishing the entire membership and leadership of the NPP, Akufo-Addo minced no words when he stated that every NPP member will have to bond with each other if the party is to be victorious in 2016.

2016, he said, will not be the year where the NPP would have to be worrying itself over “little” issues, assuring the gathering that the current internal wranglings within the party will be resolved very soon “so we can have the peace in our party to move on.”

He added that “the Ghanaian people are looking up to us, and as such we cannot afford to play with their destinies. Our country and our party are bigger than any of our personal problems.”

The next phase of the “Rise and Build Tour” will see Nana Akufo-Addo visit the Eastern Region from Monday, September 7 to Wednesday, September 9, before moving to the three Northern Regions.