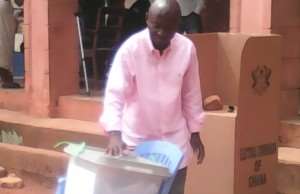 Atta Kyea casting his vote
Almost all the biometric verification machines in the 25 districts of the Eastern Region which were supposed to be used for yesterday's assembly elections were not functioning at the time the polls were expected to start.

DAILY GUIDE gathered that in about 20 districts where the elections were conducted, many of the electorate who were at the polling centres at 7:00 am were asked to go home and come back later because the verification machines had frozen.

In some cases, it was learnt that the Electoral Commission (EC) couldn’t get power to charge the batteries of the machines Monday night at its regional offices, which rendered most of them (machines) redundant at the time polls were supposed to have begun.

The electorate in areas like Koforidua-New Juaben, Suhum, Nsawam, Akyem Oda, Kyebi, Mpraeso and Akyem Tafo were reported to have been stranded, making most of them go back home without exercising their franchise.

The EC Returning Officers reportedly used the old registers to begin the process which caused a delay. However, they quickly changed the old register with a new one as the biometric verification devices were unable to verify the bio-data of the prospective voters.

DAILY GUIDE's visit to some of the polling centres revealed that the process delayed. Voting began at about 10 am at some places.

At the Galaway polling station in the New Juaben municipality, the presiding officer told DAILY GUIDE that the machine started working after the replacement of the voter register.

Low Turnout
The turnout was said to be low at the 3,037 polling stations across the 812 electoral areas in the region.

Scores of the aspiring assembly members expressed worry about the situation, as most of them accused the EC of not giving publicity to the electoral exercise.

In some of the villages, DAILY GUIDE gathered that a lot of people boycotted the exercise and went to their farms.

Injunctions
In the Odumase Manya Krobo District, a Koforidua high court had granted an injunction barring the Electoral Commission from conducting the election in the Akuse-Natriku electoral area.

The injunction followed an application by Kloma Gbi (a Krobo youth/advocacy group) and Mr. Sakitey Asare, a concerned citizen of the area, who were jointly contesting the placing of the Akuse-Natriku electoral area under the Shia Osudoku District of the Greater Accra Region, instead of the Lower Manya Krobo Municpality of the Eastern Region.

Notice of the injunction was granted by the court on Monday, August 31, 2015, and served on the EC.

There was another injunction on the election at the Kwahu-Abetifi (Kyemase electoral area).

The plaintiff and aspirant, Madam Bernice Akoto, told DAILY GUIDE that there was no notice of poll at the area and also the number of aspirants weren’t known to the electorate.

Accra: One Killed As 4 Cars, 2 Motorbikes Collide At Anyaa
13 minutes ago