Government cracks down on refugees 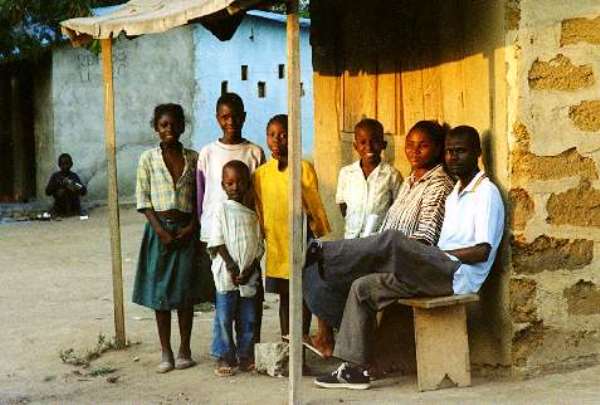 BUDUBURAM REFUGEE CAMP, Ghana — The government in Accra has imposed martial law on this Liberian refugee camp, fearing reports that mercenaries are being recruited to upset elections scheduled for December.

Police patrol its paths and search any vehicle coming in or out of the sprawling camp. Anyone who cannot produce proof of citizenship or a United Nations identification number is taken in for questioning.

On a typical night, more than a hundred Ghanaian soldiers in fatigues armed with assault rifles stand in formation in the camp's dusty main square.

"A lot of people are very much panicking," said Francis Hinney, chairman of the Refugee Welfare Council, the camp's Liberian leadership. "These people are running from armed conflict," he said. "If you've seen your whole family wiped out by people wearing that same type of uniform, that same color, carrying that same kind of gun, how would you feel seeing that at this camp today?" Restrictions were imposed on the camp after the National Transitional Government of Liberia published an ad in a Liberian newspaper warning that armed Liberian rebels could cause instability in neighboring countries, including Ghana.

Liberian mercenaries have been blamed for attacks in Sierra Leone and Ivory Coast, and there is increasing international pressure to turn over former Liberian President Charles Taylor, now in exile in Nigeria, to a war-crimes tribunal in Sierra Leone.

Mr. Hinney said there is no truth to these published accounts. Refugees are in no position to attack a country that has protected them for 14 years, he said.

"Why would Liberians want to do that? Why would we want to take over Ghana? Why?" he asked.

Jane Muigai, the U.N. protection officer for the camp, said that the Ghanaian government has been "civil" about the restrictions and that the U.N. High Commissioner for Refugees has received no complaints from camp residents about harassment or intimidation.

"I think the government of Ghana has repeatedly said they're taking these measures so that security is not taken for granted. No ill-intentioned person is going to take advantage of the camp," she said.

About 1,200 of the camp's 42,000 residents have registered with a camp-based group seeking to return to Liberia, but that country is hardly ready for the return of its 1 million refugees in neighboring countries, who represent nearly a third of its population.

The transitional government put in place by the United Nations is sliding into disarray, with appointees accusing each other of partisan politics.

The U.N.-led disarmament effort in Liberia is behind schedule, having only secured parts of Monrovia, the capital, in the year since Mr. Taylor was forced into exile in Nigeria.

Despite repeated calls for warring factions to submit lists of their weaponry, it remains unclear how many guns, rocket launchers and heavy weapons are in Liberia. Interim President Charles Gyude Bryant hasn't ventured outside Monrovia.

A U.N.-sponsored voluntary repatriation program scheduled to begin next month likely will accept only the most desperate of cases, including people searching for family members who were lost while fleeing the country.

A serious effort to return refugees to Liberia probably will not take place until next year, Mrs. Muigai said.

Camps in Monrovia for the displaced already are overcrowded, and no one seems to know what's going on in the Liberian countryside.

"There are villages and towns that have disappeared," said James Kollie, executive director of the Association for the Reconstruction of Liberia, a group devoted to getting refugees ready for their eventual return home. "When people are repatriated, they should not compound the problems at home."

"If a person is repatriated, and he doesn't have a place to stay, or the refugee camp is better than what's at home, he's going to get into trouble fast," Mr. Kollie said.

In 1997, when a general election swept Mr. Taylor into office with more than 70 percent of the popular vote, thousands of refugees returned to Liberia, only to discover that there was nothing in the country for them but roving gangs of former combatants.

"No preparations were made for the return of the refugees," said Jos Garneo Cephas, a journalist living just outside Buduburam refugee camp who returned briefly to Liberia in 1997 as a U.N. monitor.

He said refugees were bundled onto buses heading for their home regions, but when they arrived, they discovered they had come home to nothing: no jobs, no houses, no roads, no crops, no tools. Some people slept on the streets.

Others returned disillusioned to the refugee camps, he said. Some were killed. "I believe those who go home have greater impact," said Dan Browne, another refugee at the camp.

"I can't continue to remain here," he said, adding that the camp hasn't had running water in five years.

"The U.N. is saying: 'Why are you here?' but I can't go back just like that. I want to see some signs of reason in my country."

Jerry J. Tiehn, who is recruiting camp residents into training programs to give returning refugees a new start as electricians, carpenters or computer programmers, said: "We want our people to go home freely. If they're going to go home, we want them prepared to start a new life."

Irene Jayee, another Liberian refugee here, worries that returning home when the country is still so fragile may make her sons, aged 19, 16 and 5, vulnerable to gangs. She left Liberia in 1990, and two of her five children were born in refugee camps.

Mrs. Jayee keeps the British Broadcasting Corp. running softly on her radio 24 hours a day, waiting for word that peacekeepers have moved into the rural areas of Liberia and disarmed the rebels who terrorized the towns and villages. "The country is still not safe," she said.

Matthew Cephas disagrees. He'd rather chance life in Liberia than face soldiers at the refugee camp and will return as soon as the United Nations offers repatriation.

"I feel the country is safe, even though it's not 100 percent clear and free, based on the disarmament," said the computer-engineering student. Abraham Taylor, however, won't let Ghanaian soldiers push him into leaving before he's ready.

He said he would rather wait to return to Liberia until after he completes a computer-training course and becomes certified as an electrician. • Karen Palmer is currently in Accra, Ghana, as a volunteer with Journalists for Human Rights.