Annan urges world leaders to enforce the rule of law 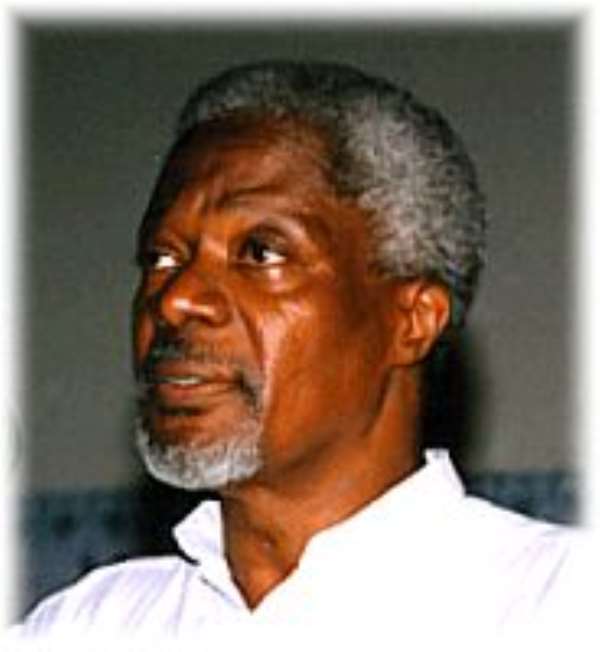 United Nations, Sept. 21, GNA - United Nations Secretary-General Kofi Annan, opening the 59th Session of the General Assembly, on Tuesday, urged world leaders to commit to the enforcement of the rule of law both at home and at the international levels to end conflicts, violence and other atrocities that have engulfed the world.

Mr Annan told the delegations of 191 countries at the Assembly that wanton disregard for the rule of law had resulted in killings, corruption, conflicts and human rights abuses across the globe. Vice President Aliu Mahama is leading Ghana's delegation at the Assembly.

"Throughout the world, the victims of violence and injustice are waiting- they are waiting for us to keep our word-," Mr Annan said. "They notice when laws that should protect them are not applied." Mr Annan, who reiterated his pledge to dedicate the rest of his tenure of office to the enforcement of the rule of law, said it was the responsibility of those in leadership positions to ensure that no one was above the law and everyone was protected by the law.

The principles of the world body, he said, synchronised with those founded by Hammurabi about 3,000 years ago in present day Iraq, which championed the cause against the strong oppressing the weak and for right to make might and not might to make right.

He asked the leaders to examine their conscience to see whether they do not fall short of these principles.

Posterity, he stressed, would judge them while their peoples suffer the fate of injustice if they did not act collectively to ensure that the rule of law prevailed in every sphere of society.

Mr Annan urged them to sign the treaties that protect civilians in conflicts and war situations and to strengthen and implement disarmament pacts before their departure.

Expressing his commitment to expedite action into investigations of suspected genocide in Dafur, he called for support to restore normalcy in that area.

United States President George W. Bush, defended his country's intervention in Iraq and Afghanistan, saying its actions had brought democracy and the respect for human dignity to those countries. He asked for support from the international community to make those countries the models of democracy and progress in the Middle East. Mr Bush proposed the establishment of a Democracy Fund within the United Nations to assist new democracies to lay the foundation for free speech, respect for human rights, funding of political parties and labour unions.

His country, he said, would contribute substantially to the Fund. The Presidents of Brazil, Gabon and the Emir of Qatar also delivered their addresses.

Vice President Mahama is scheduled to address the Assembly on Thursday. Foreign Minister Nana Addo-Dankwa Akufo-Addo is with the Vice President.