Disaster Relief Funds Will Be Misused--Watch Out!!! 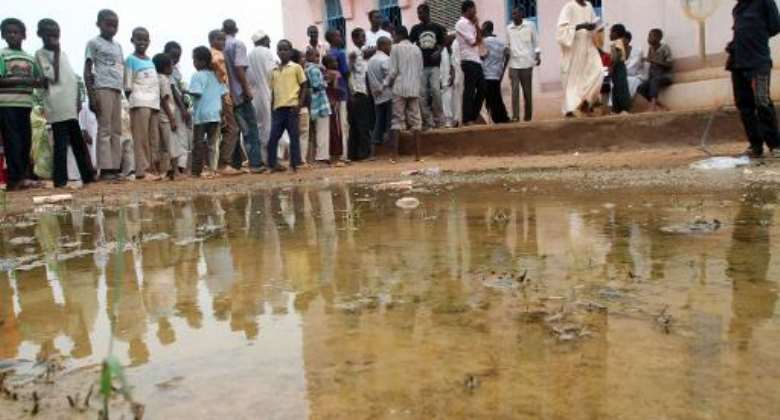 The announcement by President John Dramani Mahama that his government has made available a Ghc.50 million assistance package for victims of last Wednesday’s flood and fire disasters has been greeted with mixed feelings by most Ghanaians. Let him and the NDC keep pretending all is well. The reality on the ground is that John Mahama is the most unpopular head of state since independence. Nobody believes him apart from his die-hard supporters.

Half-way into the 7th year of the Mills/Mahama administration people feel very uncomfortable at such pronouncements. Having recklessly mismanaged this country’s economy without the slightest regret, it becomes difficult to read any good meaning into another authorization/directive/order from the president. Even school children are fed up with his refrain of “fixing” things.

Yes, the Ghc.50 million could be voted all right but the biggest question is whether the government has ability and competence to manage another huge amount from the central coffers. Admittedly, it would be another proverbial saying of going to fetch water from the river with a basket. By the time one climbs the bank of the river, an infinitesimal quantity of water or virtually nothing would be left in the basket.

Experiences in many parts of the world show that disaster funds meant for covering the immediate basic needs of survivors are misused by governments and its agencies. In effect disaster funds are not wisely used.

Corruption activists believe, that huge sums of aid money rolling into countries in times of disasters are too much of a temptation for crooked politicians and government officials. That is the reason such a fund must be critically and methodically monitored by all concerned especially civil societies.

Following the 26th December 2004 tsunami disaster that had devastating effects on many countries in South Asia, funds were established in which billions of dollars were pledged. Even though it is a fact that not all the pledged amounts were received in the affected countries, experts have concluded that moneys were stolen and misapplied. In Sri Lanka for example their former Economies Affairs Minister Basil Rajapaksa and brother of former President Mahindra Rajapaska, was recently arrested on his return home from the United States. Mr. Rajapaska had been accused of financial irregularities with respect to disaster funds. As far back as 2005, there were cries of moneys being siphoned from the disaster fund with impunity. But his government vehemently denied any complicity.

Not even the pain and suffering of the Indonesian Aceh region people would appeal to the hearts of government officials to show mercy. A whooping $A5.9 million was diverted to fund a conference in Jakarta, aimed at attracting foreign investment. A clear case of mistrust.

We also have another bad example in Japan during the 3/11 earthquake, tsunami and nuclear disasters where funds were used to pay for unrelated projects. Dubious projects were funded out of the reconstruction budget.

The Philippines Commission on Audit (COA) discovered that, huge portion of the P352.5 million in emergency fund of the Department of National Defense in 2013, had been misused by the military which spent money meant to help victims of national disasters to pay for its fuel consumption and repairs of its offices. The Commission questioned how P843.5 million in the Quick Response Fund (QRF) of the DND remained un-liquidated since 2012. The COA did not seem to be satisfied with answers from the DND because part of the QRF was transferred to various bureaus under the DND for the acquisition of equipment, petroleum, oil and lubricants, training, construction, repairs and improvement which the COA said defeated the purpose of the fund.

Liberia lost over 4,000 of its nationals during the Ebola crisis. For me the darkest moment of President Ellen Sirlaf Johnson’s rule, was when she blocked an investigation her former Justice Minister Christian Tah had ordered into an aid fund of $5 million that had not been audited. She was responding to calls by some senators for an investigation into the National Security Agency of Liberia which was headed by the President’s son.

Another case of misuse of Ebola fund surfaced in Sierra Leone. An Auditor General’s report covering the period May to October, 2014 revealed that nearly $5.75 million received to fight Ebola were spent without saving the necessary receipts and invoices to justify the spending. That amount represented one-third of the total $19.32 million.

So long as the National Disaster Organization continues to be wholly staffed by political appointees, its operations would be shrouded in secrecy when it comes to accountability. Even before this current disaster, there were reports of NADMO lacking the capacity to distribute items to victims in different parts of the country. Their depots were virtually empty. Then came the bombshell from Dr. Kwabena Adjei, former Chairman of the ruling National Democratic Congress who openly accused the NADMO Chairman Kofi Portuphy of large scale grabbing and distribution of items to party delegates. President Mahama pretended he had not heard of what was going on and even countenanced Portuphy’s dual role as NADMO chairman.

Talk of corporate connivance and the NDC’s expertise and excellence is unequalled. Nobody is prepared to bear the cart. The manner in which serious national issues bothering on dissipation of state funds are quickly buried under the carpet is a dent to their social democratic credentials.

Three clear days after the June 3 disaster, victims consistently complained of receiving very little or no assistance from NADMO. Worried about the plight of these traumatized fellow Ghanaians, JOY FM and Mobile Water rushed to the affected areas to supply them with water and food. NADMO officials had gone to distribute a few blankets and student mattresses. With no clean water for use by the victims there is a possibility of cholera outbreak.

Why should it take another disaster to occur before the president takes a decision to replace Kofi Kportufe? Is the case that NADMO now faces intense public criticism on the relevance and recalcitrance of his new chairman that he had to quickly do something?

Like a child, President Mahama can scream and chunter because Ghanaians are blaming him but we have every right to scrutinize his performance. We are sated with his grumblings. Can the president say on oath that he is unaware of the hundreds of filling stations mushrooming all over the country which are alleged to be owned his “big” men? Since they are smart people, the Environmental Protection Authority and the National Petroleum Authority have issued them with relevant papers to operate.

President Mahama is a historian and we need to remind him that no matter how short our memories are, it is too early in the day to forget the incalculable harm his government and party have inflicted on us. Ghanaians concerned about how bad our country is being run by the NDC, must keep track of every pesewa of the so-called Ghc.50 million as well as any other donations coming from different directions. Otherwise, some people will do their thing again. If this happens, the “do-no-harm” aspect of disaster management would be completely lost on us.