Vehicles Wasting Away In State Institutions 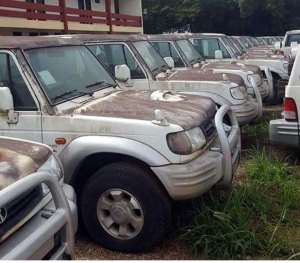 On my official duties around the country, I have noticed with deep pain in my heart, the number of vehicles that are wasting away.

Some of these vehicles can be found in garages, but majority of them are at the mercy of the weather in fitting workshops, campuses and premises of various state organizations. With the connivance of some drivers, transport officers, bursars and even directors, vital parts of these vehicles have allegedly been removed and sold.

It is sad, that top public officials entrusted with the responsibility of taking care of state property, look on unconcerned as rot and rust take heavy toll. Ironically, these are the same officials who on yearly basis complain of inadequate vehicles to do their work. They unashamedly insist that their organizations are entitled to project vehicles, the cost of which run into thousands of dollars. Once acquired, they pack their personal vehicles at home and use the new ones which are not properly serviced.

What has touched my heart in the past several years, is the increase in the number of these vehicles in our schools and colleges. At least one can find a minimum of two abandoned vehicles in a government institution.

Many Ghanaians are getting fed up with the work of the Public Accounts Committee of Parliament where public officials who have sometimes deliberately messed up with the accounts of their organizations, are simply reprimanded and allowed to go. The question on the minds of the Ordinary Man/Woman is whether they would not have ended up in jail with an infraction of the laws of the land.

This is why on a yearly basis, these public servants repeat the same mistakes and nothing happens to them. Therefore, they prepare budgets requesting for new vehicles while they intentionally declare the old ones not good for use and sell it to themselves or their favourites at very ridiculously cheap prices.

If the assurances from the committee and the Auditor-General that they would no longer tolerate such irresponsible practices is anything to believe, then we are on our way to correcting these wicked and unpatriotic public citizens.

So long as our politicians fail to critically and professionally perform their jobs as heads of institutions, the public servants will put them into serious troubles.

At the beginning of President Akufo Addo’s administration, some party functionaries who knew how government vehicles were being stolen or changing hands, decided to monitor and even seize them. Though that seemed uncoordinated at the time, it was a good way of identifying where those vehicles were. Instead of appreciating the efforts of the gentlemen, they were given names and ridiculed. A unit was later on set up to audit all state vehicles. It was obvious, that by the time the dust had settled, a lot of the vehicles had been hidden and their particulars changed. Well, anybody who doubts these claims, should provide the necessary statistics.

Would the Taskforce on Retrieval of State Assets tell Ghanaians what has happened to the vehicles that were confiscated under the current government from 2017 when they took over from the NDC government.

My suggestion is that the Minister of Information Kojo Oppong Nkrumah and the Minister of Monitoring Dr. Anthony Akoto Osei, must take urgent steps to find solution to this irresponsible acts. A quick move will save the country money.

As for the serving officers and even those on retirement who will be found to have deliberately put the nation into such preventable situation, they must .be made to face the law.

I sold my virginity to a fetish priest for money, now my vag...
15 minutes ago

Economic crisis: We are all in this together and we intend t...
30 minutes ago