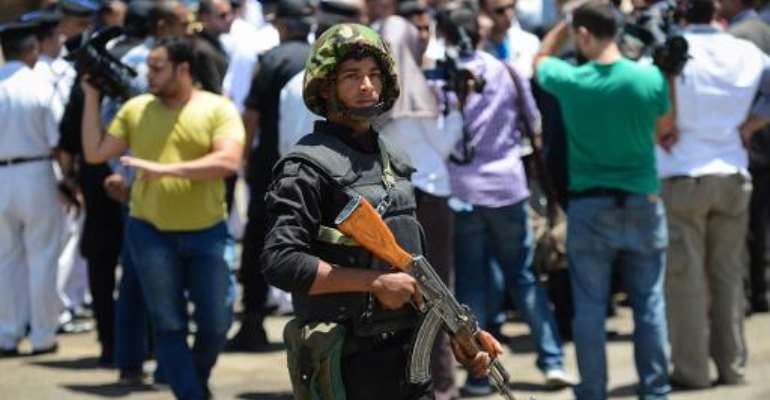 An Egyptian soldier stands guard at Karnak temple in Luxor, on June 11, 2015. By Mohamed El-Shahed (AFP)

Luxor (Egypt) (AFP) - Egyptian police were closely monitoring Friday the condition of the third assailant in a foiled suicide attack on Luxor's Karnak temple, who is critically wounded in hospital, officials said.

They were also hunting for three people suspected of aiding Wednesday's failed attack, a police official in Luxor said, after security services said they had narrowly averted a "massacre" of tourists at the popular ancient site.

On Wednesday, assailants widely believed to be jihadists tried to carry out an attack at the Karnak temple, an ancient complex in the southern city.

One of them killed himself by setting off the explosive vest he was wearing, while police killed an accomplice and seriously wounded the other.

"The only lead we have to reveal the truth behind the attack is the injured assailant," an official told AFP.

Health ministry official Nahed Ahmed said the suspect "was injured by two bullets to the head and is in a critical state.

"He's virtually in a coma and in intensive care. He absolutely cannot be interrogated in his current state.

"We are doing our best to save his life. Egypt needs him to live to find out who is behind the attack."

The hospital where the suspect is being treated has been placed under heavy surveillance, a police official said.

The circumstances surrounding the attack remain unclear, and the nationalities of the dead suspects has not yet been confirmed.

A taxi driver who drove them to Karnak reported that they spoke in Arabic and used some French words, the official added.

DNA tests are underway to identify the two dead men.

Police sources and those close to the investigation said the third attacker is an Egyptian from Beni Suef province, south of Cairo.

Police have questioned his family, the sources said.