"Culprits Behind The Flood And Fire Disasters" 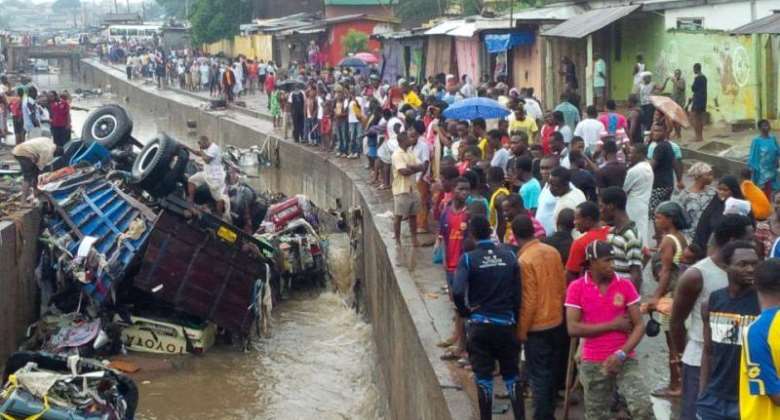 In a typical "African" country like Ghana both subjects and authorities bark only after the worse has happened. Following the torrential downpour last Tuesday 3, which led to massive deaths and wantom destruction of properties; leadership and all sundries has being awoken from their slumber.

Yet as to ascertain the pros and cons of the inferno at the Goil Filling and the poor drainage facilities, the blame game has come to play. As for my aged grandmother at home, she believe the heavy rains amidst deep thunderings was all the plight of God.

"He is speaking to us, for our sins have increased. Increased rate of armed robbery, murdering and other evil things stands as the cause". Castigating His Excellency the President, Award-winning Mayor of Accra and the entire NDC party has also become a massive ordeal. It's sad to say the least when people behave in such partial and cruel manner. Are we all not citizens of this country? So, why blame others?

Now, my question is; how could you and I have averted such calamity?

Foremost, it is an undeniable fact that government is responsible for the safety and security of its citizens. It is also in the modus operandi of government to lay good drainage systems that could drain downpoured waters in the city. The inspection of sites before building is all the job of government.

The government moreover has the sole legal right to stop or bring down illegal structures especially ones sitting on waterways. If these are all responsibilities of government, why are we still suffering? Have the government failed us?

"We need the compassion and the courage to change the conditions that support our suffering. Those conditions

are things like ignorance, bitterness, negligence, clinging, and holding on" as said by Sharon Salzberg. Which conditions have we had the courage to change? The answer is obvious, negligence have being the order of the day. We all wish Ghana turns like the Great Britains, Americas, Japans and the rest but we have neglected our roles to play in developing mother Ghana. When you mount areas like James Town, Chorkor, Sukura, Maa Mobi, Nima, Glefe, Sodom and Gomorrah.etc you would testify how people have delibrately invited floods to destroy them. Illegal structures has being erected all over, even on waterways hence causing flood in the slightest downpour.

These same people would describe the activities of the Mayor as heartless when their structures are being demolished. They also resort to illicit oiling of the palms of building inspectors by giving them some form of inducement we term in the Ga parlance "noko fio" inorder to get a go ahead with their illegal constructions.

Disposing of refuse and defecating in gutters or large water drains forms thick waste blocks, hence, preventing water passage. These waters then overflow unto the streets and into our homes rendering us stranded.The flood had displaced not less than 43,087 people a NADMO official said. 25 people are reported drowned and about 200 more have being wasted after the explosion at the Goil Filling station at Adabraka burning down a Forex Bereau and a Pharmacy.

Commercial activities halted in the capital as the aftermath of the heavy downpour left people either indoors or scooping water unendingly from their rooms. Kaneshie and its environs were not also left out, as vehicles were submerged in the water preventing vehicular movement.

We must rise as a nation, desilt all nearby gutters, avoid indiscriminate disposal of refuse and desist from the erection of illegal structures.

Far be it that I'm siding with government. Government does not need to spend so much on disaster victims. Prevention they say is better than cure. So why not develop the city instead? Dealing with the situation once and for all would rather save us more money as there as more disasters to befall us since raining never cease.

On this note, would someone stop the ranting and get to work?