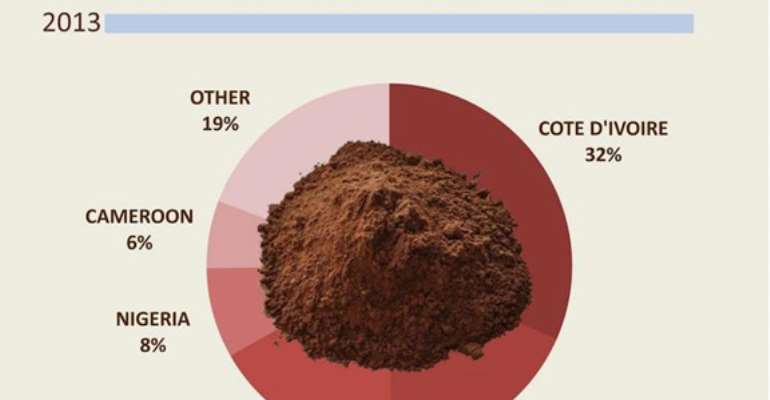 Brief history of Cocoa in Ghana
Cocoa originated from around the headwaters of the Amazon in South America. Its cultivation and value spread in ancient times throughout the Central and Eastern Amazonian region and northwards into Central America. Cocoa beans were used by the Native Americans to prepare a chocolate drink or chocolate and also as a form of currency for trading purposes and payment of tribute to the king. After the conquest of Central America in 1521, Hernan Cortez and his Conquistadores took a small cargo of cocoa beans to Spain in 1528, together with utensils for making the chocolate drink.

By 1580 the drink had been popularized in the country and consignments of cocoa were regularly shipped to Spain. The popularity of chocolate as a drink spread quickly throughout Europe, reaching Italy in 1606, France in 1615, Germany in 1641 and Great Britain in 1657.

Large-scale cultivation of cocoa was started by the Spanish in the 16th century in Central America. It spread to the British, French and Dutch West Indies (Jamaica, Martinique and Surinam) in the 17th century and to Brazil in the 18th century. From Brazil it was taken to SÃO Tome and Fernando Po (now part of Equatorial Guinea) in 1840; and from there to other parts of West Africa, notably the Gold Coast (now Ghana), Nigeria and the Ivory Coast. The available records indicate that Dutch missionaries planted cocoa in the coastal areas of the then Gold Coast as early as 1815, whilst in 1857 Basel missionaries also planted cocoa at Aburi.

However, these did not result in the spread of cocoa cultivation until Tetteh Quarshie, a native of Osu, Accra, who had travelled to Fernando Po and worked there as a blacksmith, returned in 1879 with Amelonado cocoa pods and established a farm at Akwapim Mampong in the Eastern Region. 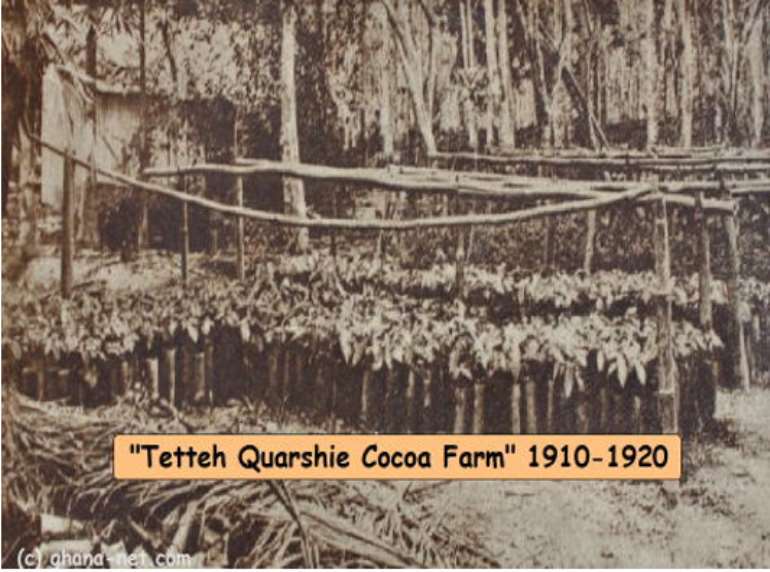 Farmers bought pods from his farm to plant and cultivation spread from the Akwapim area to other parts of the Eastern Region. In 1886, Sir William Bradford Griffith, the then Governor, also arranged for cocoa pods to be brought in from Sao Tome, from which seedlings were raised at Aburi Botanical Garden and distributed to farmers. (COCOBOD, 2015) 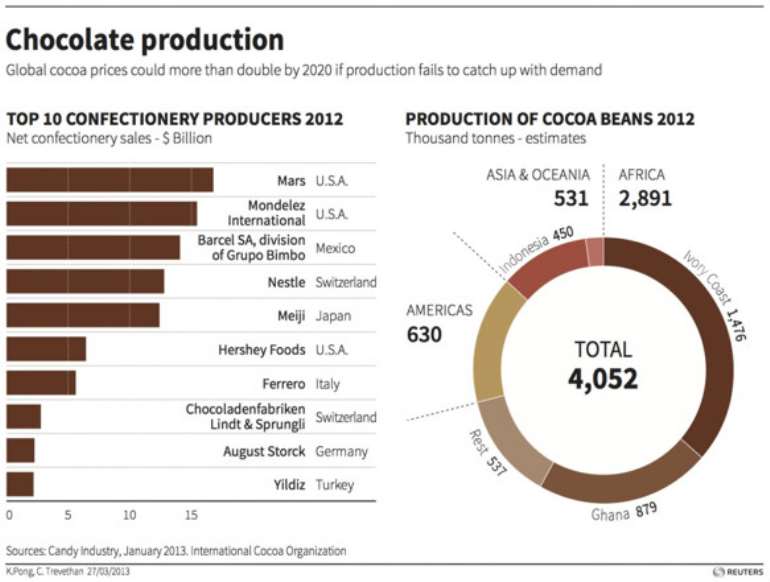 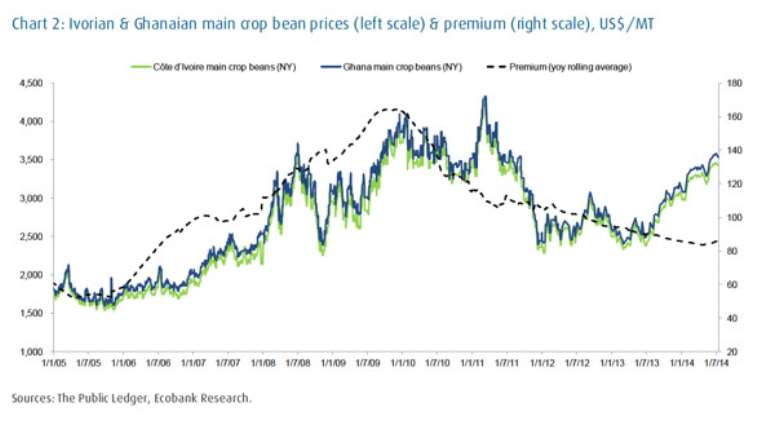 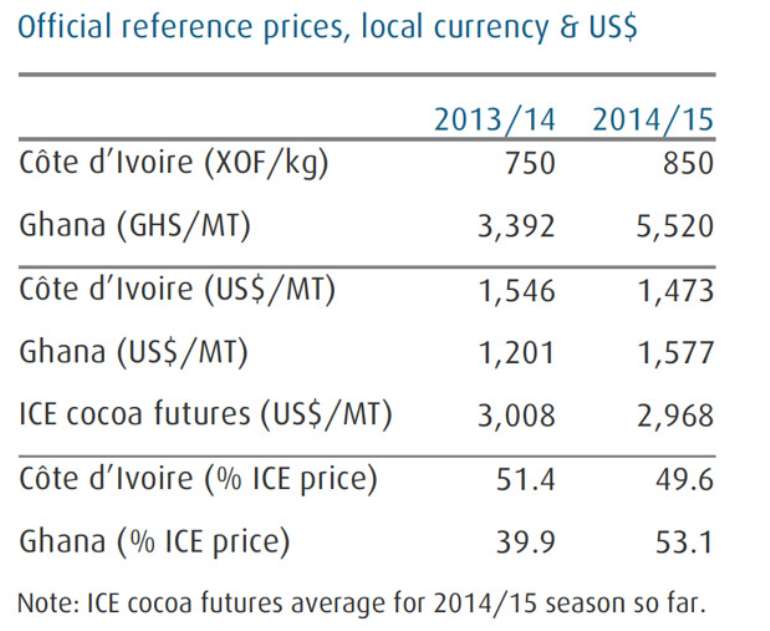 Cocoa output in Ghana, the world's biggest producer after Ivory Coast, exceeded seasonal targets due to “good” weather and an increase in plantings, according to the country's industry regulator, COCOBOD. According to the CEO of COCOBOD, the target was 830,000 tons. Other reasons cited for the good crop yield were favorable weather conditions, and new farms coming on board from the Volta region. Purchases in Ghana were 22 percent higher as of Jan. 2, the most since 2010-11, data from the researcher in Bethlehem, Pennsylvania, showed. [1]

At the beginning of the 2014-2015 cocoa season, Ghana's COCOBOD projected a target yield of 1million tons. A projection that many analysts described as over ambitious from the onset. The rational of the COCOBOD team was that, the recent increase of producer price of cocoa by 62.74% should be enough economic incentive for the farmers to foster increased productivity. 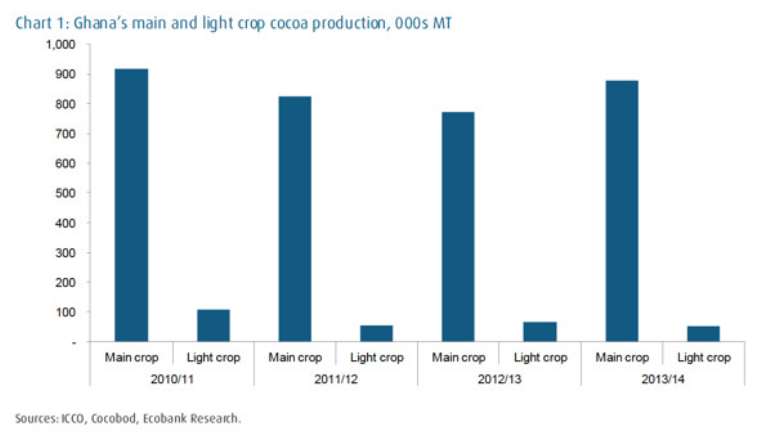 Bad seasonal weather, pests and smuggling prompted Ghana's industry regulator, the Cocoa Board (Cocobod), to revise down crop estimates by 15 per cent last month (May 2015). But traders and analysts say that the shortfall could now be closer to a third of the original 1m tons it said that it would produce in 2014-15, as large pre-paid deliveries of the aromatic, dark bean have not showed up. With Ghana's output normally accounting for about 20 per cent of global production, prices for cocoa — the essential ingredient for making chocolate — will be volatile until there is more clarity, traders say. The lack of information from Cocobod and its sales arm, the Cocoa Marketing Company (CMC), has frustrated some industry executives.

The International Cocoa Organization (ICCO) has taken the initiative to downgrade Ghana's 2014-2015 projected output by 22%. The estimate for the Ghana crop – the world's second largest was slashed by 114,000 tons, to 696,000 tons. This represents a 22% year on year contraction. However the public and investor community is still awaiting an official explanation for the poor harvest.

One thing is certain, Ghana's CMC has oversold by 200,000 tons. And it is worth noting that this amount is a lot of cocoa. Analysts forecast that the crop could be the lowest since 2009.

Reasons given for this production shortfall (official and unofficial) 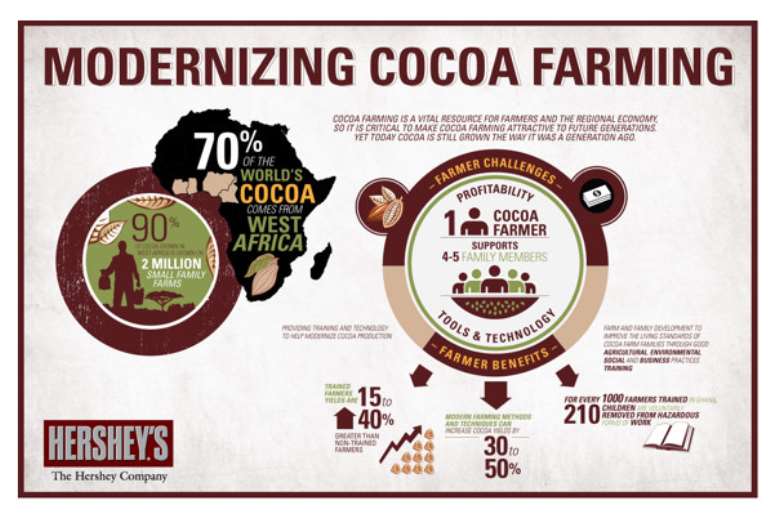 About the author:
Anang Tawiah is a Business and Technology Investment Consultant and strategist based out of New York City. He specializes in the areas of investment risk management, investment strategy, marketing strategy and return on investment management. He can be reached at [email protected]