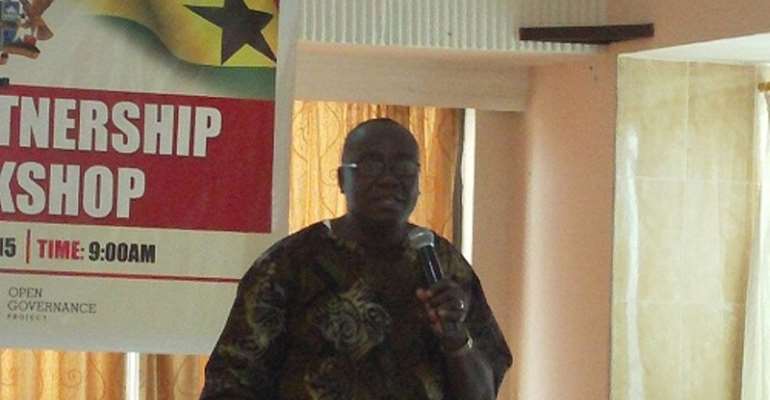 He said the first OGP National Action Plan ended in December, 2014 and in March this year, an Independent Researcher engaged by the Global OGP Support Unit submitted its report on the implementation of Ghana's first OGP action plan.

In that report, he said, Ghana did not do badly even though there are some of the commitments which are yet to be implemented.

Mr Danyo stated at a two-day National Steering Committee workshop organized at Dodowa, by Ghana Integrity Initiatives (GII) to draft the second OGP action plan to meet the aspirations of Ghanaians and contribute substantially to improving the quality of life of the ordinary Ghanaian.

He explained that as a requirement, the action plan needs to be developed through a broad consultative process and urged members to proffer ideas that would impact positively in shaping the second action plan.

'It is my fervent appeal that the meeting will exercise the utmost patience to review the first action plan with the view to identifying the commitments that had not been implemented and which need to be rolled onto the second action plan.

'In addition to this, the MDAs represented, are expected to inform the meeting about the activities they are planning to implement, which are relevant to the OGP,' he added.

Mr Danyo complained of lack of funding, which is hindering the activities of the OGP and appealed to all stakeholders, especially government agencies to own the partnership and contribute towards its successful implementation.

'Government agencies should not leave the OGP on civil society organizations as if they are the only ones who desire to develop the country,' he said.

He said in the past years; it took the interventions of Star Ghana and Ghana Integrity Initiative for the OGP to organize its activities and was grateful to the two sponsors for their support.

Mr Linus Azato Atakorah, the Project Coordinator of OGP- GII, however called on Government to step up National Action and commitments towards the OGP Action Plan. 'Ghana must do more to fully implement the targets'.

He said currently, there are a chunk of commitments under the indicators, which the country either partially met or did not meet at all and stressed the need for stakeholders to put in the necessary efforts to facilitate compliance to conform to the Global OGP standards.

He said a survey conducted in 2014 and early 2015 indicated that Ghana is lagging in all the indicators; transparency, participation, control and oversight.

Mr Atakorah said the state of Open Governance in Ghana in the area of transparency, showed that the country fully met only 15 per cent of its commitment, 11.4 per cent partially met and 73.6 per cent was not met at all.

The country met only 20.8 per cent of its participation commitment, 10.9 per cent partially met and failed to meet 68.3 per cent of the commitment.

On control and oversight, he said the country achieved 31.0 per cent, partially achieved 13.2 per cent and 55. 8 per cent was not met.

In connection with this, Ghana is expected to develop a National Action Plan for submission to the Global Secretariat of the OGP by December 2012 and demonstrate progress in implementation by April 2013, which it complied accordingly.

The OGP is an international initiative that seeks to secure concrete commitments from governments to promote transparency, enhance citizen's participation, promote accountability and adopt new technologies to enhance good governance.

Within the framework of promoting state-civil society collaboration, the OGP is governed by a Global Steering Committee comprising representatives of government and civil society organizations.

In Ghana, the Public Sector Reform Secretariat has the oversight responsibilities for coordinating both government agencies and civil society organizations on the partnership.

Since the initiative began in 2011, the OGP has grown from eight participating countries to 65 countries, including eight countries from the African continent. Among the eight countries only three are from West Africa - Ghana, Liberia and Sierra Leone.