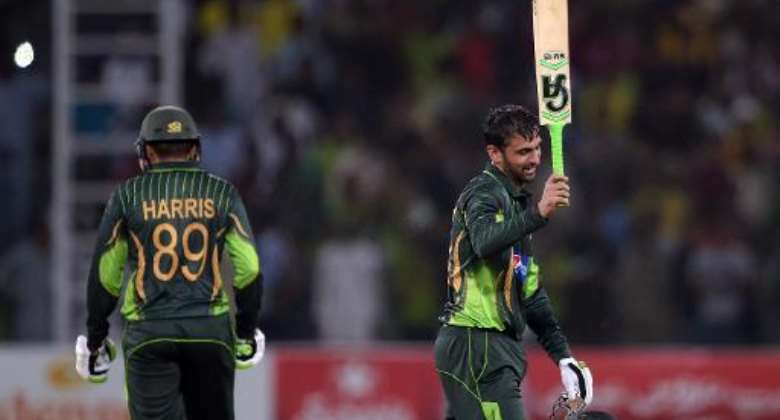 Pakistan's Shoaib Malik celebrates after reaching his century against Zimbabwe on May 26, 2015. By Aamir Qureshi (AFP)

Lahore (Pakistan) (AFP) - Shoaib Malik capped his one-day return with a brilliant century to help Pakistan post their highest total against Zimbabwe of 375-3 in the first day-night international in Lahore on Tuesday.

Malik, playing his first ODI after two years, notched a 76-ball 112 with 12 fours and two sixes after Pakistan won the toss and opted to bat on a flat Gaddafi Stadium pitch.

Malik built on a confident 170-run opening stand between Mohammad Hafeez (86) and skipper Azhar Ali (79) as Pakistan improved on their previous best total against Zimbabwe of 349 at Jamaica in 2007.

Malik, 33, was dismissed off the last delivery, caught in the covers off Tinashe Panyangara.

Malik had been part of a 201-run stand with Haris Sohail (89 not out), a new record for the third wicket against Zimbabwe, beating the 145 runs which Javed Miandad and Amir Sohail put on at Hobart in 1992.

Zimbabwe are the first major team to tour Pakistan since terrorist attacks on the Sri Lankan team bus in March 2009 led to the suspension all international cricket in the country.

Huge security continued to be deployed at the stadium and for the teams, with a sell-out 27,000 crowd expected to watch the match.

Zimbabwe spurned a good chance of separating the two when Chris Mpofu dropped a catch at the long-on boundary off Prosper Utseya.

Utseya then dismissed both the openers off successive deliveries with Ali caught off a miscued sweep while Hafeez missed a straighter delivery and was bowled.