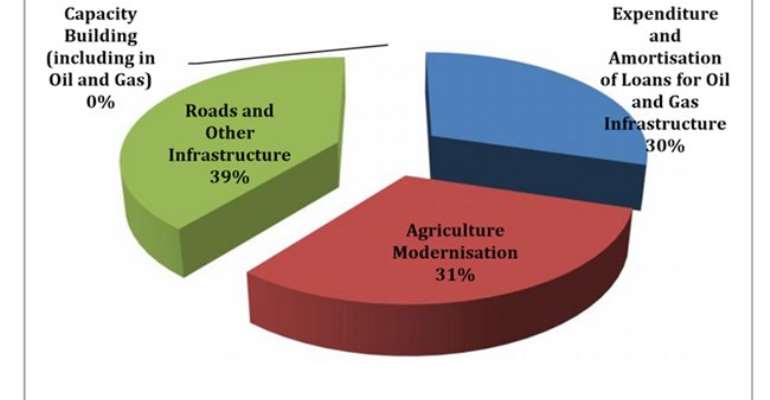 The recent Public Interest and Accountability Committee report has revealed that no new national agricultural program was funded by the Annual Budget Funding Amount of petroleum revenues allocated to the ministry for agricultural modernization.

The Committee also observed that all the national agricultural projects/programmes funded with part of the ABFA since 2011 are old interventions that were began before the commercial production of oil in Ghana.

The 2013 report indicates that although 13.60 million cedis of petroleum revenues was allocated for agric modernization, the impact of such programmes cannot be visibly acknowledged by stakeholders in the agricultural sector.

In the year 2013, the ABFA was allocated to the four priority areas: agricultural modernization, capacity building, amortization of loans, roads and other infrastructure. The Capacity Building priority area appears to be a category under which certain expenditure items which may not be related to capacity building have been classified. For instance, approximately GH¢23 million of ABFA earmarked for capacity building from 2011 to 2013 went into consumables (such as goods and services for NADMO and MOFA. While another GH¢8.1 million was given out as cash transfer under the LEAP.

Thirty-five million (GH¢35 million) was allocated to MASLOC while another GH¢19 million has been used to set up Venture Capital Fund and Exim Guarantee Fund.

The executive director for the Center for Social Impact Studies Richard Alima, in an interview with Joy News said the creeping perception that petroleum revenue is free money should stop.

According to Mr Alima, expending petroleum revenues on NADMO and the Ministry for Lands and Natural Resources, Musician Union of Ghana, are misplaced and worrying. He said since petroleum is a finite resource, it is imperative for revenues to be utilized in sectors of the economy where the state will get the optimum results.

The Center for Social Impact Studies says it is disappointing that government support for PIAC has not been forthcoming. Since its establishment the PIAC has been supported by international organizations like Natural Resources Governance Institute (NRGI) which housed the committee until recently; and GIZ which has been funding the publication of the committee reports.

The centre finds it unacceptable that government shirks its responsibility to these international organizations, noting that in the face of mounting corruption allegations and concerns over misuse of petroleum revenue it is imperative that PIAC is strengthened to perform its oversight role well.

The PIAC report further reveals that in spite of these, only GH¢8.93 million (representing 6.7%) of the total allocations to the Capacity Building, a priority area, has gone into developing capacity in the oil and gas sector over the 3 year period between 2011 and 2013.

It recommends that the Ministry of Finance should provide details of how an amount of GHï¿ 85.82 million allocated to the “expenditure and amortisation of loans for oil and gas infrastructure” priority area from the 2013 ABFA was utilized

In order to prevent the recurrence of spreading ABFA funds thinly over a wide range of projects that make little impact in the economy, the PIAC report recommends that the Government of Ghana should prioritize and provide the necessary resources for the formulation of a non-partisan long-term National Development Plan to guide the efficient and effective utilization of petroleum revenue

Meanwhile, a reconciliation of the Petroleum Holding Fund for 2014 submitted to parliament by the Minister for Finance indicates that a total ABFA, of GHÈ»163.08 million was utilized for Expenditure and Amortisation of Loans for Oil and Gas Infrastructure, GHÈ»170.62million for Agriculture Modernisation and GHÈ»215.69million for Roads and Other Infrastructure. There was no expenditure on the Capacity Building component.

The 2014 Reconciliation Report on the Petroleum Holding Fund is a follow up to the 2013 Report, in line with Section 15 of the PRMA. The report gives a full account of how much revenues were received into the Petroleum holding fund, how the funds were distributed, managed and expended.