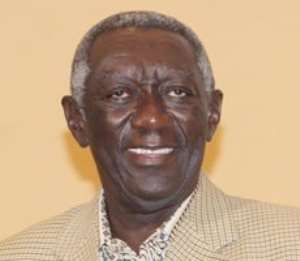 The Delaware State University in the United States (DSU) today conferred an honorary doctorate degree in Humane Letters to former President John Agyekum Kufuor for his exemplary leadership qualities and contribution to the alleviation of hunger and poverty around the world.

Conferring the honours, President of the University, Professor Harry Williamson said Former President Kufuor’s exceptional leadership catapulted Ghana from a developing country status to that of middle-income in a matter of seven years, during his administration.

“This admirable achievement, made Ghana to stand out from among the community of African and developing countries … DSU is proud to be associated with you” Professor Williams said.

In his speech, which was the first by a former head of state at the DSU, former President Kufuor told graduates at the 126th Commencement ceremony that the youth of today are “inheritors of the legacy of the globalization process that has engulfed the world now.

“This reality of globalization comes with it, the ever-growing awareness that inter-dependence among nations and peoples of the world is indisputable. The world has been demystified – becoming smaller and smaller – and opening up into one market; symbolized by competitiveness. “

“This imposes a responsibility on the youth to adequately prepare themselves for global leadership to enable them to sustain and save the planet for all mankind,” he added.

Former President Kufuor added that the world today is a fast-changing one which presents numerous challenges as well as opportunities.

He said the youth can only take advantage of the opportunities if they serve with humility and diligence as well as broaden their horizon in whatever field of endeavour they find themselves.

“The time has come for your generation to aspire to leadership that would be globally transforming, and you can only do this when you join and associate with forces that seek the ultimate good of all humanity.

“Hunger, poverty, disease, deadly migratory voyages, social and economic deprivation and inequalities anywhere and everywhere in the world, especially in the least developed countries and conflict areas, should be of concern to you.

“Let your global outlook shape your view of others from different cultures and backgrounds,” the former president said.