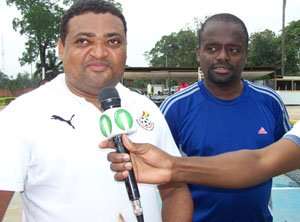 Former deputy Ashanti regional minister Joseph Yammin has alleged that the leadership of the main opposition New Patriotic Party (NPP) in the Ashanti region is planning to bus people to the much publicised celebrity vigil against the power crisis in the country.

He says he is reliably informed that the NPP plans to infiltrate the vigil with their members in order to boost up the turn out.

Three screen icons Yvonne Nelson, Lydia Forson and Sarkodie are organising the #Dumsormuststop vigil on May 16 to compel the John Mahama-led administration to find immediate solution to the blackout.

Speaking on the Ultimate Breakfast show with host Prince Minkah Thursday, the former deputy sports minister said the celebrities cannot marshal up the numbers if they are not supported by the opposition.

“I am not expecting more than 100 people; how many celebrities do we have in this country?

“But you expect a larger crowed and the NPP will like to take advantage of that.

“Yvonne Nelson herself stated that after her interview with the BBC that a leading political figure contacted her and wanted to take advantage of them.

“However, I am expecting that when the dumsor is over, they will plan another vigil to thank the President,” he said.