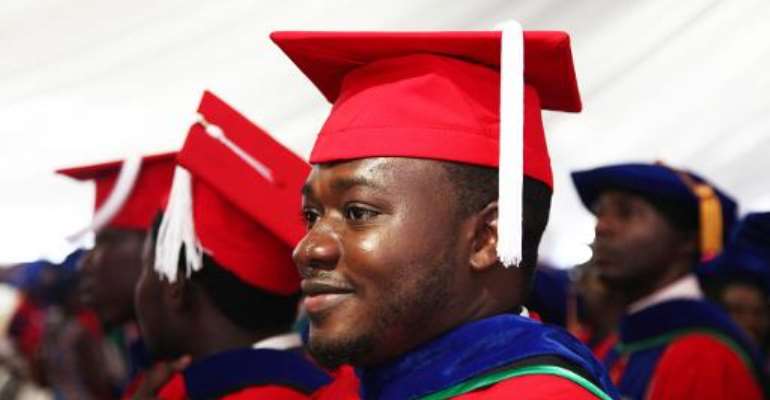 Abubakar Umar looks on during his graduation ceremony at the American University of Nigeria in Yola, Adamawa state, on Saturday May 9, 2015. By Emmanuel Arewa (AFP)

Yola (Nigeria) (AFP) - Dressed in a red and blue gown and mortar board, Abubakar Umar collected his degree on Saturday looking like just another proud student.

But if there was nothing to make the 26-year-old petroleum chemistry student stand out from his classmates, the story of how he came to be at his graduation ceremony at the American University of Nigeria in the northeastern city of Yola, is one of sheer courage and determination.

Last November, Umar was driving home to the city of Kano 640 kilometres (400 miles) away when he ran into Boko Haram insurgents, who opened fire twice on his car, hitting him in both arms.

"I lost so much blood, there wasn't any medication. But somehow I think the Lord kept me alive for a special reason and one of those reasons was to complete my degree."

The signs were ominous as Umar left Yola, crossing from Adamawa state into neighbouring Gombe on the seven-hour journey to Kano, northern Nigeria's biggest city.

Fellow drivers warned him to take another route. On it, the military checkpoints were unmanned.

In the early hours of the morning as he approached Potiskum, the commercial capital of Yobe state and a frequent Boko Haram target, he slowed to avoid potholes on the road. Then he heard gunshots.

"I just saw these people coming out of the bush. They were screaming 'Allahu Akbar' (God is greatest) and shooting at my car," he recalled.

"At first I stopped because some of them had military trousers and boots but then I noticed their headbands and what they were saying, so I realised they were insurgents.

"They shot me in my right arm. I continued (driving). I didn't know where I was going. I just kept on driving. I thought I would reach a checkpoint and report the case. I never met any checkpoint.

"I slowed down again because of the road and they shot me for the second time. I fractured my arm."

After abandoning his car, blood flowing from his wounds and broken bone exposed, he stumbled upon a village and was taken in by locals, at grave risk to their own lives.

He was ushered to a filthy communal toilet where he passed out.

When he came round later in the day, the locals -- wary of reprisals if he was ever found -- provided him with a heavy salt and water mix to pour into his wounds to stop the bleeding.

After hiding out all day, he managed to call for help on a borrowed mobile phone. He spent the night in the village until friends picked him up the next day.

Even then, he had to disguise himself just in case he stumbled across rebel fighters, who at the time had bases in the area.

"I put mud and chicken dung on my head to look like a madman," he said. "I removed my shoes and put them in my pocket... (but) I didn't see Boko Haram."

Umar returned to university in January after surgery on his wounds, the scars of which are still visible on his arms.

"I came back and I couldn't use my right hand for 14 weeks... I couldn't write, I couldn't press (keys on) the computer. When the cast was removed, I was OK," he added.

After six years of violence, at least 15,000 deaths and some 1.5 million left homeless, there are often few positive tales to tell about the bloody Boko Haram insurgency.

But by battling to complete his degree -- at a university teaching the secular "Western" education Boko Haram opposes -- Umar knows he is one of the lucky ones.

To go with his degree scroll, Umar, who now wants to study for a master's qualification, also received a special award for courage.