No end in sight for Dumsor; Power barges still under construction 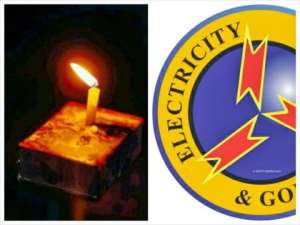 Ghana's emissaries sent to Turkey to find out the state of power barges that would ease Ghana's power crisis have come home empty handed..

According to a member of Parliament’s Finance Committee, Kwabena Amankwaa Asiamah, one of the emissaries, the power barges are still under construction.

This means the current load shedding exercise which has led to loss of lives, jobs, closure of businesses and affected the lifestyles of citizens may persist for a while longer.

Power Minister Dr Kwabena Donkor had in February this year listed the Turkey barges as one of the major interventions to ease the energy crisis in the country.

Numerous deadlines and promises by government officials, and allied institutions to resolve the crisis have all been broken.

But Dr Donkor sounded reassuring on his first public statement after he was appointed Power Minister.

"I wish to assure you that the Ministry of Power is working around the clock to end this current load shedding in the short term and also to implement long-term measures to avoid future recurrence of load shedding.

"...The darkest period of the night is the period just before day break. We assure you that we are closer to daybreak than we think," he stated at the press conference.

Barely a week to the end of April, emissaries sent to Turkey have returned with worrying reports.

The company, Karpower, tasked to provide the power barges to Ghana told the emissaries they [Karpower] are not the best company to be contacted during emergency periods.

"According to Karpower if they had been informed before the announcement by government that delivery will be in April they would have told government and whoever is concerned that 'no, Karpower cannot deliver by the end of April.'"

"Because Kapower according to the manufacturers is not an emergency company to supply power barges to needed institutions or countries.

He added that they saw a number of ships at the Istanbul shipyard, including a six engine ship which would provide 120 megawatts of power.

Even though that is not Ghana's power barge, Amakwaa Asiamah said that one can be made available to Ghana in August, if the necessary letters of credit are made available.

He said the one requested by Ghana is a 12-engine ship with the capacity of providing 225 megawatts of power.

Work on that one is only 80 percent complete, he indicated, adding it can only be ready for use in September.

Meanwhile, Ghanaians are continuously wailing about the worsening power crisis in the country.

What's So Special About NAM1 That Akufo-Addo Is Shielding Hi...
34 minutes ago