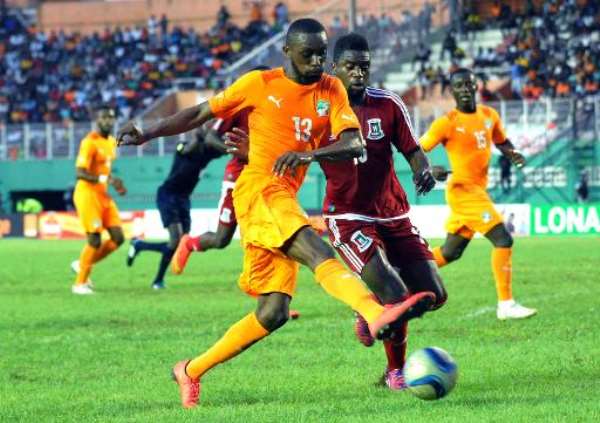 And dogged Equatoguinean resistance kept reigning African Footballer of the Year Yaya Toure, Wilfried Bony and other Ivorian stars at bay until 18 minutes from time when Max-Alain Gradel levelled.

It was the second friendly match within four days for both countries after Ivory Coast defeated Angola 2-0 in Abidjan and Equatorial Guinea lost to Egypt by the same score in Cairo.

The Abidjan fixtures were designed to celebrate Ivory Coast winning the 2015 Cup of Nations in Equatorial Guinea last month after a penalty shootout against Ghana.

But they were not forgotten by French coach Herve Renard, who brought them to Abidjan and the pair did a lap of honour with the trophy before the kick-off.

In another high-profile friendly, hosts South Africa failed to take advantage of poor recent form by Nigeria and needed a stoppage-time goal to snatch a 1-1 draw in north-east city Nelspruit.

Akpeyi was deputising for injured Vincent Enyeama, widely regarded as the best current African shot-stopper, who won his 100th cap in a shock midweek friendly loss to visiting Uganda.

That defeat, failure to qualify for the 2015 Africa Cup of Nations and defend the title, and the lack of a permanent coach have cast deep shadows over the three-time African champions.

Former Nigeria skipper Stephen Keshi, who guided the Super Eagles to their last Cup of Nations title two years ago, has yet to react after being offered a new contract this week.

A Nigerian side under caretaker coach Daniel Amokachi silenced most of the 20,000 Nelspruit crowd by snatching the lead five minutes from time through Ahmed Musa.

The slightly-built winger from Russian club CSKA Moscow curled a shot from the edge of the box over goalkeeper Itumeleng Khune and into the corner of the net.

South Africa had squandered a great chance to take the lead midway through the second half when Akpeyi blocked a casually-taken Andile Jali penalty.

Zambia spoilt the debut of young Northern Ireland-born Rwanda coach Johnny McKinstry with a 2-0 victory at the National Heroes Stadium in Lusaka.

Rainford Kalaba put the Chipolopolo (Copper Bullets) ahead on the hour and recalled Alan Mukuka doubled the advantage 10 minutes from time.

A Mbwana Samata goal on 78 minutes rescued a 1-1 draw for Tanzania against Malawi in Mwanza on the shore of Lake Victoria after Micium Mhone put the visitors ahead.

Mozambique came from behind to score in the final minute and grab a 2-1 away victory over Botswana in Lobatse.