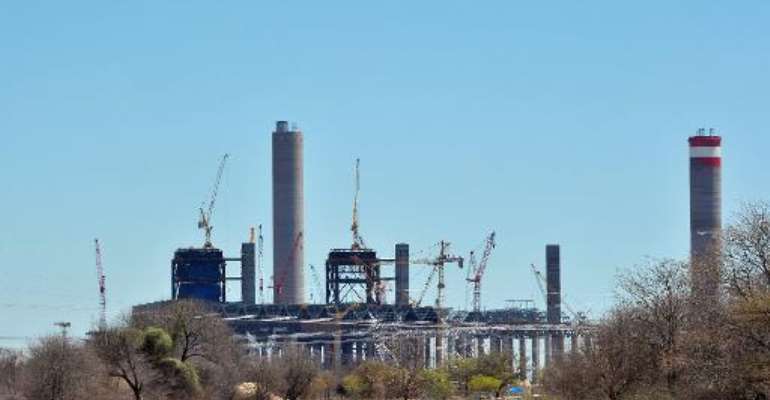 The Medupi station outside the northern South African town of Lephalale on October 7, 2011. By Alexander Joe (AFP/File)

The workers staged their latest one-day strike on Wednesday over allowances and bonuses.

The Medupi plant's first unit was due to be completed in 2012 but is now scheduled to open in June. It will, however, not be operating at its full capacity of 4,764-megawatts until 2020.

The station, which will be the fourth-largest coal plant in the southern hemisphere, is expected to ease South Africa's power crisis, which regularly leaves factories, shops and homes in darkness and has hit economic growth.

"Over a thousand workers have been fired," Eskom spokesman Khulu Phasiwe told AFP. "Many of these workers had participated in an illegal strike."

The National Union of Metalworkers of South Africa (NUMSA) said the contract workers were dismissed via text messages.

The messages told workers that they were "not required to report for duty" and would face "disciplinary processes".

The sacked workers were employed by contractors building the station, located in northeast South Africa.

"This stance is going to harden attitudes and lead to a total shutdown of the power station, in the midst of the massive black-outs," said NUMSA spokesman Castro Ngobese.

One of the contractors, France's Alstom, told AFP that none of its workers had been sacked.

South Africa's ageing coal-fired plants struggle to provide the 30,000 megawatts of electricity consumed each day in Africa's most advanced country.

With public anger growing over the power cuts, the government this month fired several executives at Eskom.

"Why is Medupi not finishing, it should have finished more than a year ago?"

An inquiry is underway to probe delays in new power stations, poor performance of plants and Eskom's financial problems.

Shortly after government suspended Eskom's executives earlier this month, Standard & Poor's downgraded the credit rating status of the company, which generates about 95 percent of the country's electricity.