Aliu breaks silence on Dagbon: "We are innocent" 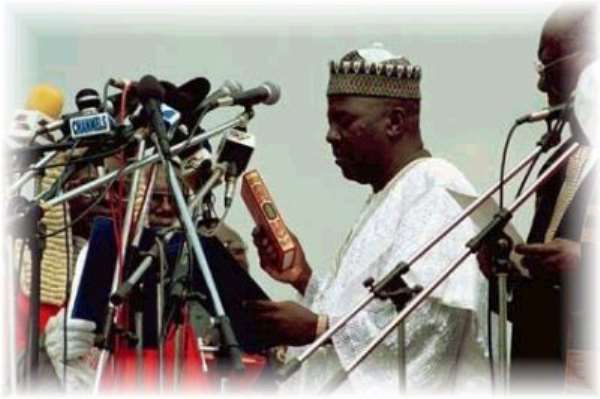 Sekondi, Aug. 8, GNA - Vice President Aliu Mahama, on Sunday, denied the involvement of any member of the government in the murder of Ya-Naa Yakubu Andani, King of Dagbon, and challenged any individual or group with evidence contradicting his claim to prove him wrong. "I have not commented on this issue until now because of its sensitive nature," he stated.

"However, I am compelled to break my silence because some detractors are determined to use this unfortunate incident as a political weapon to score cheap points."

Vice President Mahama made the statement when he addressed the Muslim Community at Sekondi Zongo, at the start of his four-day official visit to the Western Region.

The Vice President said the killing of his King and kinsmen was an atrocious act, adding that, it was unthinkable that any responsible Government or right-thinking person like President Kufuor would endorse it.

"I wish to state that neither President Kufuor, myself or any member of the NPP administration had a hand in the murder of the noble King and I am ready to face any legally constituted authority to face the truth," he stressed.

The Vice President said both President Kufuor and himself were willing to take an oath with the Bible and the Koran respectively in accordance with their faith to face the wrath of God if the need arose.

"It is the dream of every Government that its country would enjoy peace and progress, so what is the sense in engaging or condoning any activities that would undermine the conditions that you work for" he asked.

Since the incident, the Vice President said, huge national resources had been spent to restore peace to the area and it was wrong for anybody to stall the progress if they would not contribute to the solution.

"Some people now claim that they know the perpetrators of the murders and they would solve the crime when they assume the leadership of the nation," he noted.

"But why do they want to hold on to the information when the case must be resolved now. Do we have to wait indefinitely as nobody knows when they, will come back to power," he wondered.

Vice President Mahama said President Kufuor was a close friend of the Ya-Naa and had high regard for him, while other members of his administration were also close to the late King.

The Vice President said two weeks before his murder he visited the King to pay his respect when he went to Bimbilla for the by-election. "What would be the gain in riding on violence to achieve any goal if, indeed, there is any," he asked. "This administration is committed to maintaining peace in all areas at all cost."

He expressed concern about the determination of some people, particularly politicians, to peddle lies to win the support of others, stressing that lies may achieve immediate goals but that success is often short-lived.

"The truth, the truth is very paramount and as God fearing people we must endeavour to uphold the truth at all times."

The Vice President also refuted allegations that the Kufuor Administration would execute the Alliance Compliance Order when it is voted into office again in 2005, saying, it is ridiculous for anybody to believe that rumour, which was used in the 2000 electioneering campaign against the NPP.

"God forbid, for never will this situation happen, especially at a time when President Kufuor is leading ECOWAS to promote Sub-Regional integration. We are the same people wherever we are."

He advised the people to resist any monetary offers that would be promised them by people who would like to use them to cause violence during campaigns and the elections, saying, such people should rather be reported to the security agencies.

The Minister of Justice and Attorney-General, Papa Owusu-Ankomah, told journalists that the Government was keen in prosecuting any persons involved in the Dagbon murders and appealed to those who claim to have information to assist the Police in their investigations.

"The case is still open and the Government would not shirk its responsibility to bring any offender to book once they have been proven guilty," he stressed. "There would not be another commission of enquiry like the Wauku Commission, but the criminal investigation continues.

The Vice President would open the first every homecoming summit of the Western Region on Monday at Takoradi and visit communities at Tarkwa, Prestea, Aboadze, Agona Nkwanta and other towns, where he would also inspect development projects.