He's back! Asamoah Gyan gets heroic welcome from Al Ain 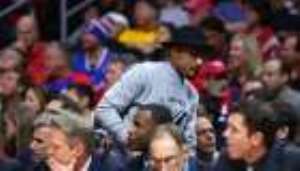 The Ghana international who plays his professional football for Arabian Gulf League club Al Ain was given a massive welcome upon his return to the United Arab Emirates.

Asamoah Gyan, who has been smashing the goals for his Al Ain club was welcomed on the football pitch by his team mates with a huge cake.

The former Sunderland striker also received a bunch of flowers from his club coach Zlatko Dalic.

The 2014 Besr Foreign Player in Asia restored Ghana's hope with a late winner against Algeria in the second group game after missing the first against Senegal through illness.

The Black Stars of Ghana progressed in the 2015 edition of the Africa Cup of Nations to the final where they were beaten by Cote d'Ivoire in a penalty shoot out.