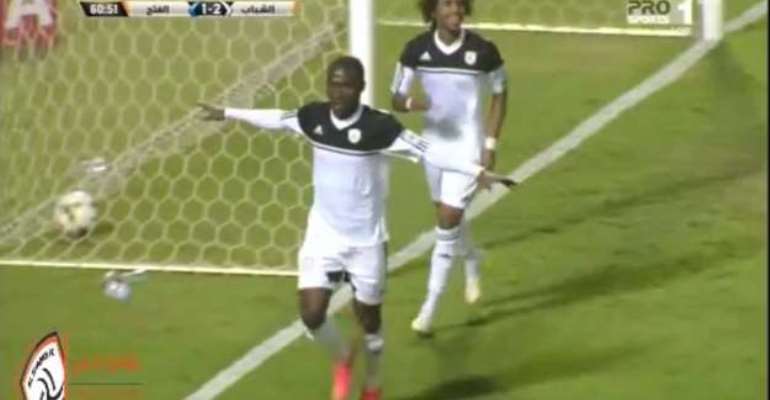 John Antwi is off the mark in Saudi Arabia after the former Hearts of Oak striker struck on his debut start for new club, Al Shabab in the Saudi Professional league on Thursday.

He debuted off the bench last week, coming on after 52 minutes after Al Shabab had fallen behind two minutes earlier at Al Khaleej in a much that will end in defeat.

But Antwi had done enough to convince Al Shabab's Portuguese coach, Jaime Moreira Pacheco  to hand him a starting place in today's match day 15 tie at home against Al Fateh.

And the Ghanaian hitman was quick off the mark, striking after 61 minutes at the King Fahd International Stadium in Riyadh to put his side 2-1 up to turn a half time deficit which had been levelled after 52 minutes for Al Shabab by 31 year old Brazilian, Rafinha, the same player who set up Antwi's goal.

Al Shabab however failed to hold on to the lead and the three points following Waleed Abdullah's 67th minute own goal as the game finished in a 2-2 deadlock.

The point garnered improved Al Shabab's build up for the campaign to 28 from 15 games and a massive nine points behind leaders, Al Nassr who have tomorrow's home game against relegation battlers, Al Raed in hand.

Al Shabab next travel to Hajer for their match day 16 fixture next Thursday. Follow @thedonplato

They Sent 'Dante Crocodiles' To Our Area To Scarce Us — Ajum...
46 minutes ago