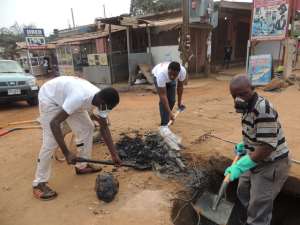 Ghanaians have been urged to participate in the national sanitation day instituted by government every first Saturday of a month to help keep our environment clean at all times and also prevent the some common diseases that normally attack people due to filth.

Chief executive officer of Rural Water Development Programme (RWDP) Bishop Nathaniel Adams made this known at Akyem-Nsutam in the Fanteakwa south constituency of the Eastern region during a clean up exercise organised in collaboration with Nsutam traditional authority in honour of the late chief, Osabarima Gyahene Kokoo ll.

According to him, it was high time Ghanaians saw the importance of keeping the environment clean as government spends a lot to get rid of filth on our streets and environment.

He, has therefore, appealed to the general public to cultivate the habit of patriotism and stop the attitude of open defecation as well as throwing of rubbish anywhere.

He also encouraged chiefs and queen mothers to lead their people during the national sanitation day to promote the initiative.

The Queenmother of Nsutam, Nana Ago ll was grateful to management of RWDP and GO WASH for honouring the late chief of his effort of keeping the environment clean and pledged her support to continue his good work. She also urged all Ghanaians to partake in the clean up campaign to get rid of some common diseases.