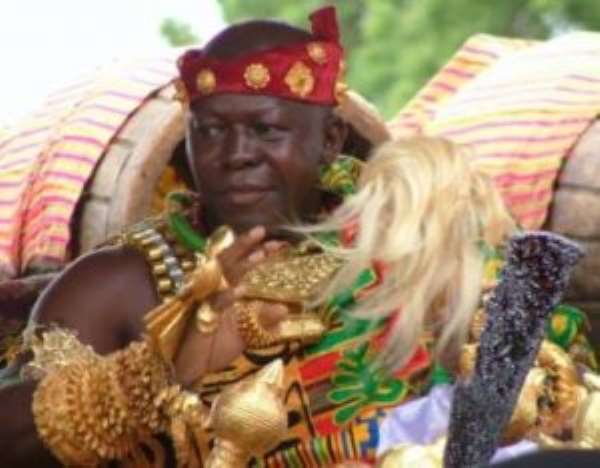 A bit of history narration will help explain the points I shall be putting across. Once, there was an Asante Kingdom (Ashanti Confederacy) formed out of different Akan states coming together to become a formidable state with a common goal of interest to all member states. This quest of theirs was necessitated by the wars in those days where single states were vulnerable to the conquering might of say, the Denkyiras or the other such powerful enemy states.

When the British conquered and captured Asantehene Nana Agyemang Prempeh I in 1896, deported him to Sierra Leone and then to Seychelles Island, the Kingdom collapsed as per the intent of the Colonial British government of then Gold Coast. When the Ashanti Confederacy was broken by the British in 1896, upon the capture and deportation of Asantehene Nana Agyemang Prempeh I, the British instituted the policy of balkanization. They broke the links between the six important nuclear states of the Asante Confederacy – Kumasi, Bekwai, Juaben, Mampong, Kokofu and Nsuta. (Balkanize means to divide (a country, territory, etc.) into small, quarrelsome, ineffectual states”. Each was viewed as a separate state headed by its Omanhene.

When the British captors released Nana Agyemang Prempeh I from his captivity, he was repatriated to Gold Coast as a private citizen in 1924. He was later granted permission by the British Colonial government to become Kumasehene in October 1926. This was even upon the sole idea of effectively implementing their indirect rule over the Asantes.

During the restoration of the Asante Confederacy in 1935, the balkanization was somehow maintained as confirmed by a document of Draft by the Ashanti Confederacy Council signed on 21st day of March 1938.

The document states among other things, “Arising out to the Council discussion on Item 7 of the Agenda the following declaration of custom is submitted to the Council for discussion and for signature if approved. 1) all land in Ashanti is the property of the stools of the various chiefs.”

The Asante Confederacy as it was known was later changed to Asanteman Council. But before I proceed any further, let me pause to define what a confederacy is.

CONFEDERACY is defined as “an alliance between persons, parties, states, etc., for some purpose” or by Cambridge dictionary it is “the situation in which states or people join together for a particular purpose, usually related to politics or trade.

As said above, the states came together for the purposes of defeating their perceived enemies whom they could not fight or stood no chance of conquering if they fought them as individual states.

They all subscribed to common regulating traditional and approved laws, the means of the union's cohesion. By that policy, each member state benefited in one way, or the other, from being a member of the Asante Confederacy.

However, does Asanteman Council of today operate same as it was in the olden days? No! Today, it is almost only one Division or one chief who is wielding despotic powers, stealing lands and properties from the other divisions and autocratically enstooling illegitimate puppets he can control, as chiefs. This despot is nobody other than the notorious Omanhene of Kumasi, the Ceremonial head of Asanteman.

What is the benefit to the other members if Asantehene Otumfuo Osei Tutu II, a known crook and criminal, is conducting himself in such a deplorable manner to the disadvantage of all the other members? He has dubiously sold lands in Pekyi. He is attempting to illegally sell Kumawuman lands. He has also sold a large parcel of land in AMANTEN near Atebubu in the Brong-Ahafo region to some Chinese businessmen who are currently aggressively working on the land. The area is not his, yet, he has sold it for 20 billion Old Cedis.

I expect the individual Asanteman member chiefs to ask themselves, how they stand to profit from being members of the Asante confederacy, or Asanteman Council or whatever they call it. There are no more wars to be fought within Ghana by tribes or kingdoms rising up against others as pertained in the olden days. Even in this global world, should any powerful tribe rise against the other, their leaders will be arrested and prosecuted in the International Court of Justice for war crimes or for crimes against humanity. This is the new world order.

Do we continue to allow one rogue, a criminal without comparison, to exploit us in the name of Asanteman and his false claims to overlordship?

Formal education adds value to life but some educated people unfortunately turn out to be “educated illiterates” by their actions, pronouncements and comportment. A typical example is the Sanaahene of Otumfuo Osei Tutu II, Professor Nana Kwadwo Nyantakyi III. He vehemently opposes any idea or act by any stool under the Asanteman Council to withdraw from the Council. He claims no stool can ever do it. Even though he is a PhD holder, I am not sure he is that much enlightened enough to share views on the Asante Confederacy. He is not that intelligent or wise enough for his views to be entertained on this issue unless he stands to profit from the illegal activities of his boss, Asantehene Otumfuo Osei Tutu II, as described above. He is the same person who went on air to posit that Barimah Tweneboah Koduah V, the chief enstooled by the popular support of Kumawuman citizens is “botomuhene” (a pocket chief who has no influence whatsoever).

However, the celebration of the said “botomuhene's” first “Akwasidee” has sent shockwaves down the spine of Asantehene, the Ghana police force, Asanteman Council and some Government Ministers. They are all coming up with various craps all of which are directed at intimidating Kumawuman people and their new chief.

What is the problem with Asantehene and his band of crooks that see the total acceptance of Barimah Tweneboah Koduah V by the public as a non-starter and hence has to be thwarted by employing official intimidation – using heavily armed soldiers and police personnel? Does not the Asante tradition require that a royal acceptable by the “nkwankwaa” of the concerned traditional area (Division) be enthroned as chief, thereby obliging the kingmakers to always seek the opinion and confirmation by the “nkwankwaa” (the youngsters or youth)?

Being a member of Asanteman Council is an agreement of convenience, but not a compulsion. Any Divisional member that feels cheated can pull out at any time and day when its members decide by their majority to do so. Asanteman is like the European Economic Area (EEA), where a member state can pull out if it thinks the union has become a white elephant, irrelevant, so to speak. In the EEA, it is greatly to the benefit of the poorer member states to continue to remain in it because the richer states do bail them out in times of economic or financial crisis, or do contribute towards their financial and economic enhancement with additional freedom of movement between member states granted to them.

Do member states within Asanteman enjoy similar benefits? No! It is only one person and his cohorts that are profiting from the union (Asanteman Council). I believe all of you know who the person is.

Intimidations - resorting to acts of using the soldiers and the police will not scare Kumawuman people. They have resolutely decided to go with their new chief, Barimah Tweneboah Koduah V, but not that fake “obo3fa dadee fa” Barimah Sarfo Tweneboah Koduah imposed on them by Otumfuo Osei Tutu II.

It takes a man to swallow his pride to say sorry. Asantehene has goofed by stubbornly portraying himself as wielding the “do or break” power to compel Kumawuman citizens to submit to his wishes and demands irrespective of how irresponsible they may be. He has no any other alternative than to put up his hands and say sorry to us. This is the only escape route available to him. The security personnel he is using to intimidate us will never help the situation but rather inflames the situation.

Stay tuned for more updates from me and Sources radio UK online. GOD is on our side. We shall defeat the enemies. Kumawuman citizens, never say die until the bones are rotten! With God on our side, we stand to prevail.