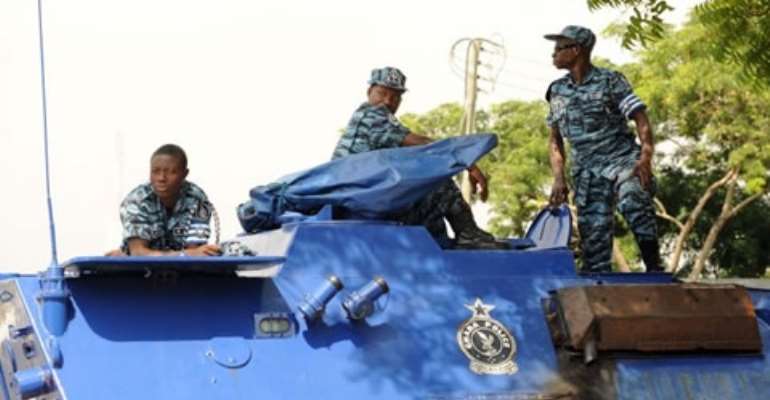 The Greater Accra Regional Police yesterday paraded eight robbery suspects and two receivers who were arrested in what the Regional Commander, DCOP Christian Tetteh Yohunu, described as a comprehensive operation.
The eight suspected robbers, who were paraded at the forecourt of the regional office, were identified as Michael McCarthy, 21, a native of Ada and an ex-convict; Richmond Kojo Sarpong, 24, a driver's mate who hails from Ashanti Mampong; Sadik Mubarak, 20, a Togolese and a house-to-house trader and Baba Abass, 18, native of Bolgatanga but resident in Ashaiman.

The others were Ibrahim Alhassan Abdulai, 22, a Malian auto mechanic; Abugri Osuman, 18, native of Bawku and resident in Tema New Town and Joe Ofori,35, a native of Takoradi and domiciled in Tema Community 1.

The receivers were Mubarak Yunac, 24, a fashion designer who hails from Chamba in the Northern Region and Ahmed Hamidu, 24, a driver's mate who lives in Prampram.

Giving the facts of the arrests, the commander said the swoop was as a result of reports of a series of robberies in and around East Legon, Accra College of Education (ATRACO), Zoomlion, Madina and Adentan and its environs.

He said on December 12, 2014 around 1am these young men attacked and robbed a Nigerian at East Legon around Zoomlion headquarters area and shot the victim in the chest.

They proceeded to rob a former lecturer of the University of Ghana, also within the same area, taking away $2000, GH¢7000, one Samsung Galaxy phone, one Itel phone, a driver's license and an ATM card.

The commander added that the same gang of robbers on January 5, 2015 attacked and robbed a Pharmaceutical Company at ATRACO and made away with an amount of GH¢27, 000, three mobile phones and an ipad.

He continued that the stolen items were later sold to one of their receivers, Yunac Mubarak, adding that the items were discovered through police investigations, leading to the arrest of the other suspects.

The commander cautioned the public to be wary of their security, explaining that most of the robbers come as domestic service providers but end up spying on homes.

He therefore advised that it was very important for people to do their household chores such as watering flowers, washing, sweeping and other petty chores rather than relying on persons whose character they know little about.