WHY Is Rising Income Inequality In Africa A Concern? 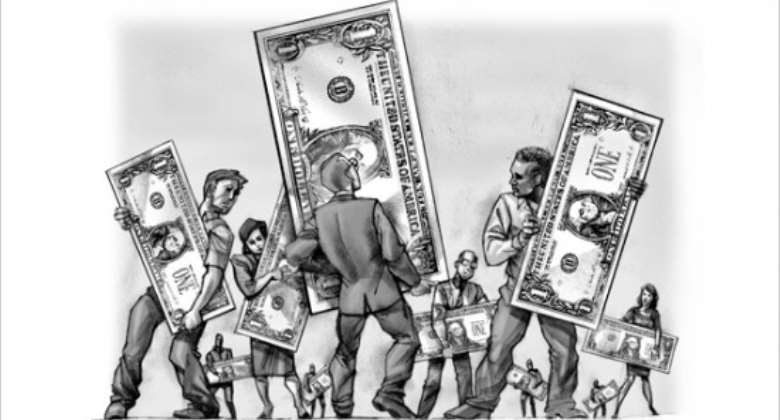 Economic prosperity is a relative term. To some, it means that overall, the economy is doing well and most people have sufficient income for essentials and perhaps a little extra. To others it means that businesses are hiring and jobs are relatively easy to get. It does not mean that everyone has a job or that everyone is well off.

It is interesting to note however, that the move from universal poverty to varying degrees of prosperity has happened rapidly in the span of human history. Two hundred years ago the idea that we could potentially achieve the end of extreme poverty would have been unimaginable. Just about everybody was poor, with the exception of a very small minority of rulers and large landowners.

Somewhere In Africa
The growing number of economic success stories across Africa indicates that broader social and economic progress is realistically attainable for most Africans.

The economic success stories have beenlargely jobless and therefore associated with increasing unemployment especially among African youth. In addition, this growth has left out many already disadvantaged groups such as rural communities, women, traditionally marginalized people, etc. In short, the economic prosperity in Africa has not been inclusive enough.

There is therefore, the need to ensure that the continent's economic growth also creates jobs and help rescue millions from poverty.

Why does economic development not translate into human development and reduction of poverty? Is the current African growth inclusive and sustainable enough?

This brings to light, the importance of making the spread of economic prosperity more inclusive and this also means that there is the need to critically examine a variety of issues such as identification of strategies for ensuring that growth translates into improved livelihoods for people; policies that empower the poor and landless, and educational policies that build the capacity of youth and other disadvantaged communities and enable them to participate in the economy.

WHY is inequality a concern?
One of the major economic happenings bedeviling the global community in the twenty century is the rising inequality gap between the poor and the rich.

Income inequality has increased in both advanced and developing economies in recent decades. Increasing inequality has been attributed to a range of factors, including the globalization and liberalization of factor and product markets; skill-biased technological change; increases in labour force participation by low-skilled workers; declining top marginal income tax rates; increasing bargaining power of high earners; and the growing share of high-income couples and single-parent households (OECD, 2008; Alvaredo and others, 2013; Hoeller, Joumard, and Koske, 2014). Many of these developments have had beneficial effects on growth and poverty reduction both nationally and globally (Chen and Ravallion, 2010; Milanovic, 2012).

There is growing evidence that high income inequality can be detrimental to achieving macroeconomic stability and growth. Recent empirical work finds that high levels of inequality are harmful for the pace and sustainability of growth (Ostry, Berg, and Tsangarides, forthcoming). Others have argued that rising inequality may have been an important contributing factor to the global financial crisis.

Africa accounts for a large share of the world's people living in absolute poverty. The number of impoverished people has doubled since 1981. Africa's share of the world's poor rose from just below 20% to close to 25% (Kayizzi - Mugerwa, 2001). Nearly 50% of the population in Sub-Saharan Africa live on less than US$ 1 a day today: the world's highest rate of extreme poverty.

In addition to Africa being one of the poorest regions in the world, the continent is also the world's SECOND MOST INEQUITABLE REGION after Latin America. Inequalities have not diminished over time. In 2010, six out of the 10 most unequal countries worldwide were in Sub-Saharan Africa, and more specifically in Southern Africa.

Income inequality is therefore rising to be a major challenge to Africa. As stated by Mr. Kofi Annan, Chairman of the Africa Progress Panel, “It cannot be said often enough, that overall progress remains too slow and too uneven; that too many Africans remain caught in downward spirals of poverty, insecurity and marginalization; that too few people benefit from the continent's growth trend and rising geo-strategic importance; that too much of Africa's enormous resource wealth remains in the hands of narrow elites and, increasingly, foreign investors without being turned into tangible benefits for its people.

Bridging the gap through inclusive growth
In many cases, there are different approaches to overcoming a challenge. We all should appreciate the dangers associated with the widening gap between the rich and the poor in our societies.

In the case achieving this vision of bridging the gap between the rich and the poor in Africa, the growth strategies must be one which is inclusive.

Inclusive growth simply implies that there is a conscious effort to ensure equitable allocation of resources with benefits spread to every section of the society. That is, an economic prosperity which is shared and geared towards the excluded in the society and one which is broad based.It also means eliminating and addressing the issues of inequalities on the African continent.

Inclusive growth therefore deals with policies that allow people from different groups -gender, ethnicity, religion‐, and across sectors - agriculture, manufacturing industry, services, to contribute to, and benefit from economic prosperity.

This means there is equal access by the rich and the poor to employment creation, market, consumption, production, health care, improved standard of living etc. This growth strategy results in a wider access to sustainable socio-economic opportunities for a broader number of people, countries or regions, while protecting the vulnerable, all being done in an environment of fairness, equal justice, and political plurality.

Through inclusive growth, the continent can reduce poverty to the minimum level. Inclusive growth would make the poverty reduction efforts more effective by explicitly creating productive economic opportunities for the poor and vulnerable sections of the society. It will decrease the rapid increase in income inequality and poverty in Africa and increase the involvement of people in the economic prosperity.