Landguards pull down over 300 houses at Kasoa 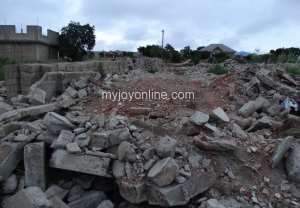 Over 300 houses have been pulled down in the West Hills Mall area around Kasoa in the Central Region by landguards.

Deputy Commissioner of Police (DCOP), Angwubutoge Awuni, head of the Police Motor Traffic and Transport Division, whose wall was also affected by the demolition exercise, disclosed on Adom FM's Dwaso Nsem, that the landguards claimed they had a court order backing their action, but this has since been proven to be false.

“They have pulled down over 300 buildings in Kasoa including my wall all because they claim they had a court order but upon investigations I know that they are fake.”

Preliminary investigations show the landguards took advantage of the need to demolish a number of buildings to allow for the construction of roads to ease the traffic congestion in and around Kasoa.

The GH¢30 million project is being undertaken by Joshob Construction Company.

DCOP Awuni indicated that the situation has been reported to the police and investigations have begun.

“The law has to deal with them for causing unlawful acts. In fact, the regional police command has some responsibility to ensure that” he noted.

He advised residents to form a watchdog committee to ensure their properties are not destroyed by unscrupulous persons.