Kenyatta vows to punish ambushers as toll rises to 22 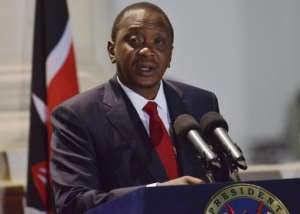 Saturday's attack took place during a security operation in Kapedo, in the arid and impoverished region of Lake Turkana that is prey to regular raids and score-settlings between rival communities.

"We will take firm action against those who killed security officers in this area," Kenyatta said, visiting the site of the ambush with Interior Minister Joseph Ole Lenku.

"Those who were missing are all dead," a senior police officer said, speaking on condition of anonymity.

The security operation was launched after another attack in the area last week in which five people, including three police officers, were killed.

Two years ago, more than 40 police officers who had been chasing cattle thieves were killed around 100 kilometres (60 miles) further north, in an ambush unprecedented in the east African nation.

Diminishing water supplies and grazing areas have aggravated conflicts between communities in the area which is mainly populated by nomadic herders.

Local police are notoriously under-equipped and can find themselves outgunned because of increasing numbers of illegal firearms appearing in the area.

In a separate incident, the army said it had foiled a machete attack on a military barracks on Sunday at Nyali, near the port city of Mombasa.

About a dozen armed youths tried to enter the barracks and the soldiers shot dead six of them.

There was no immediate information about the identity of the attackers.

Kenya has been hit by a string of mostly bomb and grenade attacks in recent months blamed on Somalia's Shebab Islamist insurgents.

Kenyan troops are fighting the extremists in Somalia as part of an African Union force.