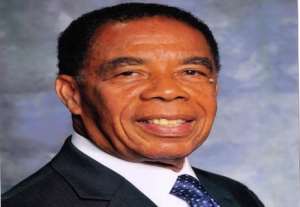 A member of the National Democratic Congress (NDC), Max George Cobbina has expressed interest in contesting for the Vice-Chair position ahead of the party's upcoming congress.

Mr. Cobbina, who is said to have been operating at the sidelines of the party together with some others as a think-tank, hopes to win one of the six available seats for the position of Vice-Chair and impart his knowledge and experience to the youth whom he believes, hold the key to the future success of the country.

Posters of the former SIC Board Chairman indicating his intentions are springing up across the country.

He is likely to face stiff opposition from some of the known faces in the umbrella family including the former Attorney-General, Betty Mould-Iddrisu, Danny Annan, former CEO of Accra Hearts of Oak, Harry Zakour, former MP Alhaji Sinare and former Minister of Education, Lee Ocran.

Speaking with journalists, Mr. Max George Cobbina said he took the decision with the sole aim of inspiring the youth who are desirous of making it in life, but are jobless and walloping in abject poverty.

“I am looking at the concerns of the youth. I believe majority of them are going through the same things that I went through – lack of opportunities to further their education, poverty among others. I believed in myself without stepping on the shoulders of another person and that is what I want the Ghanaian youth to do”, he noted.

According to him, one of the key things he would be using his position to canvass for if given the opportunity by the party's delegates, is to ensure that the capacities of the youth are built.

“So, for the governing NDC, we need to train our future doctors, nurses, engineers, teachers, bankers and others. We have to give them opportunities now”, argued the former CEO of Ghana Reinsurance Company.

He said it was about time the youth of the country were brought on board to be part of decision-making, noting that “as well as we are political, we must also be nationalistic in our approach”.

Reverse brain-drain
Commenting further, he said it was very important to embark on a major reverse brain-drain exercise to give the “kids the opportunity to learn from the sons and daughters of mother Ghana” who have been very successful in their various careers abroad.

This, he said, was very vital looking at the prospects of the country, noting “we should make sure these kids get a mentor. China and India are where they are today as a result of the reverse brain-drain”.

Mediator
He promised to be accessible to all those will call on him to share his experiences with them just as he did when he was the Western Region Coordinator for the NDC in 1996. He also promised to be a mediator in issues and help resolve amicably, internal conflicts that may arise as well as ensure that the party's rules and regulations are strictly adhered to.

Mr. Max Cobbina is Founding Member of the NDC in USA. He is also the Founder and Chairman of the NDC Think-Tank, USA.

He was a member of the NDC Communications Team under Mr. Spio-Garbrah. He is currently the Chairman for NDC, Rabbit branch of Dome-Kwabenya.