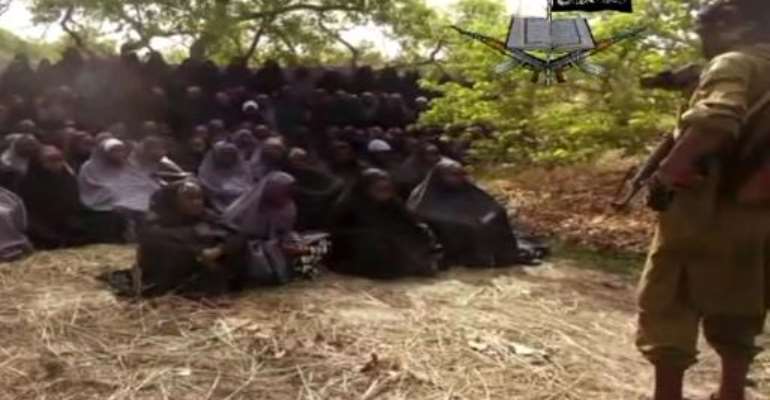 Screengrab from a May 2014 video by Nigerian Islamist extremist group Boko Haram shows kidnapped girls wearing the full-length hijab being filmed at an undisclosed location. By (Boko Haram/AFP/File)

Lagos (AFP) - Boko Haram has used kidnapped young women and girls on the front lines of its insurgency, according to a new report published on Monday, after a fresh abduction in Nigeria's far northeast.

Human Rights Watch made the claim as it outlined testimony from dozens of former hostages who documented physical and psychological abuse at the hands of the militants.

Suspected Islamist fighters kidnapped about 30 children, including girls as young as 11, in Borno state at the weekend. A week earlier, at least 40 women and girls were seized in neighbouring Adamawa.

Both kidnappings -- and continued violence in northeast Nigeria and northern Cameroon -- have cast doubt on government claims of a ceasefire deal and agreement for the release of 219 schoolgirls held since April.

In the human rights report, one 19-year-old woman who was held in militant camps for three months last year said she was forced to participate in Boko Haram attacks.

"I was told to hold the bullets and lie in the grass while they fought. They came to me for extra bullets as the fight continued during the day," she said.

"When security forces arrived at the scene and began to shoot at us, I fell down in fright. The insurgents dragged me along on the ground as they fled back to camp."

In another operation, she said she was handed a knife to kill one of five captured civilian vigilantes brought to one of the camps and summarily executed.

"I was shaking with horror and couldn't do it. The camp leader's wife took the knife and killed him," she said.

A wave of attacks by female suicide bombers earlier this year prompted speculation that Boko Haram may have been using abducted women and young girls to carry out attacks.

But there has been no concrete evidence to prove whether the attackers were kidnap victims who were coerced or volunteers.

In July, a 10-year-old was detained in Katsina state, northwest Nigeria, and found to be strapped with explosives.

In all, 30 women and girls between April 2013 and April this year were interviewed, including 12 of the 57 who fled when the militants raided a school in Chibok, Borno state, taking away the 219 others.

The women, who were held from between two days to three months, were seized from their homes and villages, while working on the land, fetching water or at school.

They described how they were held in eight different camps thought to be in the vast Sambisa Forest area of Borno and the Gwoza hills, which separates Nigeria from Cameroon.

Human Rights Watch said more than 500 women and girls have been abducted since the start of the insurgency in 2009, although other estimates put the figure in the high hundreds.

In the camps, they described seeing other women and children -- some of them infants and others as old as 65 -- but were unable to say whether all of them had also been kidnapped.

They were made to cook, clean and perform household chores. Some were forced to carry stolen goods seized by the insurgents after attacks.

The report gives an insight into life for the kidnap victims, including those from Chibok, whose plight attracted worldwide attention.

One of the interviewees said she saw some of the Chibok girls forced to cook and clean for other women and girls who had been chosen for "special treatment because of their beauty".

The women also talked about rape as well as physical violence, including one who said she had a noose placed around her neck and was threatened with death until she converted to Islam.

One 15-year-old said she complained that she was too young to marry one of the militants but a Boko Haram commander dismissed her concerns, saying his five-year-old daughter got married the previous year.

Boko Haram has used kidnapping as a tactic since the start of its insurgency in 2009 but Human Rights Watch said the authorities had done nothing to prevent it or bring those responsible to book.

Funds had been set up for the Chibok escapees but support had not been provided to other victims, he added.