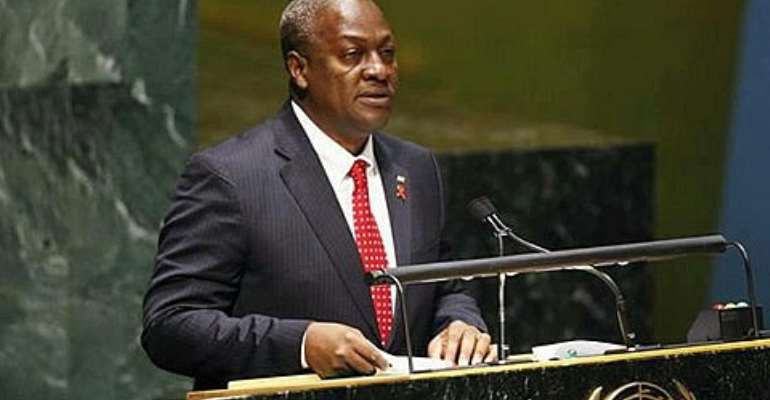 President John Mahama is expected to dwell on the deadly Ebola virus as he addresses the 69th United Nations General Assembly later today.

The Chairman of West Africa's regional body, ECOWAS, would speak to the world governing body on other important issues in New York at 15:00 GMT.

The deadly disease has struck terror into West Africa's 340 million citizens and has claimed 2,811 lives. Even worse, a US medical agency is predicting that cases could reach 1.4 million by late January 2015, up from the current total of 5,800.

President Mahama has terrible news for the world at this same time last year when he addressed the 68 th UN General Assembly on Thursday September 26, 2013.

The terrible acts of terrorism at the Westgate Shopping Mall in Kenya resulted in at least 67 deaths, including four attackers. Over 175 people were reportedly wounded in the mass shooting, with all of the gunmen reported killed.

“It is with a heavy heart that I address you today. Before I left Ghana to attend this assembly, I learned of the terrorist attack that took place in Nairobi, Kenya. I was shocked and deeply saddened to hear of the many lives that were lost to those senseless and cowardly acts of violence”.

Today, Ebola, a natural terror has replaced that man-made act of terrorism.

The President will be expected to galvanise international support to tackle the West African problem with many Africans believing that if the disease had struck the world's richer nations, a cure would have been found by now. Story by Ghana|Myjoyonline|Edwin Appiah|[email protected]