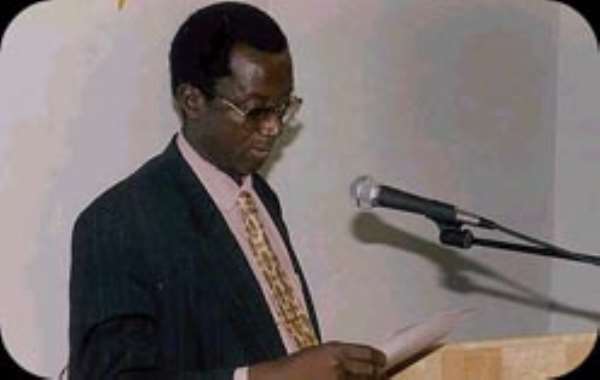 The younger brother of the late John Achuliwor(pictured), an MP for Navrongo Central and Deputy Minister of Communications and Technology, Abdallah Achuliwor, has declared his intentions to stand as an Independent Parliamentary Candidate, following the NPP's decision to impose the incumbent MP on Navrongo Central.

Information gathered by The Chronicle newspaper has it that the party has now made its decision clear that no primaries would be held at the constituencies where by-elections were conducted.

Another piece of information reaching the Brong Ahafo Desk of the paper indicates that some high-powered executives of the NPP are prepared to throw their weight behind any independent candidate whom they feel is capable of winning a parliamentary seat for the party.

The Navrongo Central is no exception, as some of the executives who spoke to The Chronicle declared their readiness to support Achuliwor to wrest the seat from Kofi Adda, the MP for the area.

One of the executives of the Upper East Region said, “I don't mind being suspended from the party, if only I know I am doing a good job.”

In an interview with Achuliwor, 49, a Customer Service Area Manager with the Ghana Telecom in Sunyani, he lamented the NPP's decision to impose Kofi Adda as the Parliamentary candidate on the constituency, instead of allowing the constituency to organize primaries to elect the people's choice.

He queried, “If the NPP feels the MP has done a lot, what is the party's fear about going to the primaries?”

According to him, primaries are the basis for testing a credible candidate acceptable by all.

The aspiring independent candidate told The Chronicle that he was in just to rescue the seat for the NPP, because Kofi Adda could not win the Navrango seat.

He said the MP had won the seat, because of the sympathy the people had, following the death of his brother, John Achuliwor.

He recalled that when his brother died, he went in to file his nomination alongside the MP and three others, following a call on him by a section of the NPP Executives to step in the shoes of his late brother, but because time was not on their side, Dan Botwe, the General Secretary; Mahami Salifu, the Upper East Regional Minister and some leaders of the NPP advised him to step down for Adda to go as the candidate during that bye-election.

Achuliwor said the executives assured him and others that primaries would be conducted this year to elect a candidate for the December, 2004 elections.

“But surprisingly, they have failed us, hence, my decision to go solo despite their warning to suspend any member of the party who would contest as an independent candidate.

“The painful aspect of the whole episode was that whilst I was mourning my late brother, I was at the same time campaigning for Kofi to win, because of the sympathy the people had for me,” he recalled.

He said he was in the campaign team of Adda also because he wanted him to win to enable him complete the unfinished job of his late brother.

Achuliwor regretted that Adda had virtually failed to continue most of the projects embarked upon by his brother, particularly the ICT Centre initiated at Navrongo.

Achuliwor emphasized that he would campaign for President Kufuor and campaign for himself as the only ultimate candidate who could win the seat.

It would be recalled that the Navrango seat was won by late John Achuliwor in a bye-election as an Independent Parliamentary Candidate and eventually won it again in 2000, this time on the ticket of the NPP.

Originally, the seat was known to belong to the National Democratic Congress(NDC), but the late Achuliwor captured it for the NPP. It was established that the late MP had managed to pull all members of the People's National Congress(PNC), including his brother Achuliwor to join him to win the one-time NDC seat for the NPP.

The National First Chairman of the NPP, Stephen Ntim, when contacted, confirmed the party's decision not to have primaries in the constituencies where bye-elections had been held recently.