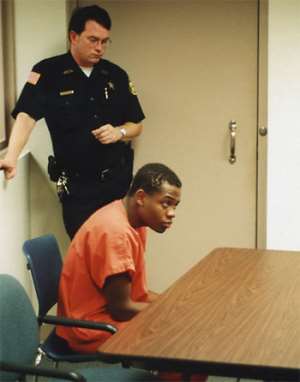 A woman who barbecued financial documents in an attempt to save her boyfriend from arrest pleaded guilty Monday to hindering her boyfriend's apprehension and received a probationary sentence.

Ashley O'Gwynn admitted to destroying documents that would have incriminated Anthony Dsane, a former Arkansas Tech University student who pleaded guilty last month to stealing identities from fellow students. Unlike Dsane, however, she avoided jail time, instead sentenced to serve 30 months of probation based on a plea agreement with Fifth Judicial District prosecutor David Gibbons of Clarksville.

O'Gwynn was in the process of burning financial documents linked to Dsane on a barbecue grill when Tech police arrested her last year, according to police reports. Other evidence recovered by authorities ultimately led Dsane to plead guilty to mail fraud in U.S. District Court, according to federal authorities. During her plea hearing in front of Circuit Judge Dennis Sutterfield of Russellville on Monday, O'Gwynn admitted that she destroyed documents, including bank statements and other evidence, in an attempt to save Dsane. Hindering apprehension is a Class D felony generally punished by up to six years in the Arkansas Department of Correction.

Dsane, 22, a student from Ghana, will be sentenced July 15 in Federal Court in Little Rock after the completion of a pre-sentencing report. Federal authorities and Dsane disagree on the amount of damages associated with the crime, meaning a hearing will likely take place in order to make that determination.

Local authorities believe Dsane was part of an elaborate scheme to defraud fellow students and at least one university professor out of thousands of dollars.

Dsane was initially accused of 15 counts of felony forgery and six counts of financial identity fraud until he was indicted in U.S. District Court on several counts of mail fraud. The case was investigated by Tech officer John Pritchard.

Police also located another bag of shredded documents in O'Gwynn's apartment, according to an affidavit attached to her charging documents.

Anthony Gray, 25, pleaded guilty Monday to stealing a television set from a Tech football coach's office, receiving a three-year probationary sentence. Gray, a Tech student who once tried out for the team, admitted to ransacking assistant football coach Todd Cooley's office in the Hull Building and stealing a television set in March during a plea hearing Monday in front of Sutterfield. Gray told Sutterfield he was mad at Cooley at the time.

Witnesses told university police they saw a man with a tattoo in the shape of the state of Texas carrying a television out of the Hull Building around the time the office was ransacked. Gray, who matched the description, at first told police he wasn't involved but later admitted to the burglary, according to court documents.

University police reports said Gray also damaged an autographed football, and the television set was later recovered at Gray's West B Street residence. The television theft was classified as a felony commercial burglary.