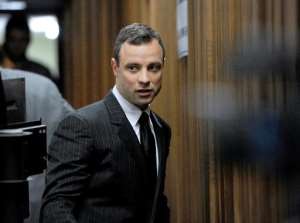 Pretoria (AFP) - Paralympian Oscar Pistorius's defence team sought on Thursday to show that the double-amputee sprinter feels highly vulnerable and acted out of fear not anger when he shot dead his girlfriend.

There are "two Oscars", he said -- a world-class athlete and a highly vulnerable individual with a serious disability.

Oldwadge was reading from a psychological report on Pistorius, who underwent 30 days of psychiatric examination before his trial resumed on Monday.

Lawyers defending the 27-year-old on charges that he deliberately shot and killed model Reeva Steenkamp on Valentine's Day last year are calling their final witnesses.

Medical expert Wayne Derman testified that Pistorius, known as the Blade Runner for his j-shaped prosthetic limbs, was not always the fearless superhero depicted in sports advertisements.

"Although he loathes to be pitied in any way, the hard truth is that he does not have lower legs," said Derman, chief medical officer of the South African Paralympic Team at the London Olympic Games in 2012.

During five months of the stop-start trial, Pistorius's lawyers have sought to portray him as manically obsessed with safety after a difficult childhood with a mother who intermittently abused alcohol and in the face of high crime levels in South Africa.

Those factors, they argue, help explain his reaction when shot he dead the 29-year-old model and law graduate through a locked toilet door, allegedly convinced she was an intruder.

Derman, who has known Pistorius for six years, said he had an exaggerated reaction to sound because of his training as a professional athlete, where a gun is fired to start a race.

"The athlete is taught not to anticipate but to react," said Derman.

The expert witness, expected to be the last before the defence concludes its case, said it was Pistorius's unusual "startle magnitude" that "culminated in this horrific tragedy".

Pistorius -- who inspired millions when he became the first double-amputee to compete against able-bodied athletes in the 2012 Olympics -- is trapped between his status as a global superstar and an "individual who is significantly disabled," said Derman.

Under intense questioning from Nel, Derman said Pistorius shot at the toilet door of his upmarket home in Pretoria in the early hours of February 14 last year to "nullify the threat."

"He fired at the sound and I'm sure that was to nullify any threat," said Derman.

Prosecutors claim Pistorius killed Steenkamp following a row, arguing that neighbours living close to him heard a woman screaming the night of the shooting.

"Not even Mr Pistorius perceived the attack by a burglar on the night to be linked to his disability," said Nel.

The witness, who Nel accused of bias in favour of Pistorius, was argumentative and indignant on the stand, at times refusing to answer questions.

Pistorius, who had appeared tired throughout the day, became alert during the cross examination, sitting up straight in the dock.

At the end of the day, he said thank you to two American tourists in court who had given him and his family handwritten messages of support.

"I really appreciate it," said Pistorius.

The trial was adjourned until Monday after Nel requested time to consult with the state psychiatrist who did a 30-day mental assessment of Pistorius, before concluding his cross-examination of Derman.

Pistorius faces up to 25 years in South Africa's brutal jails and an abrupt end to his glittering sporting career if convicted.